This article is about the World War I light cruiser. For other ships with similar names, see USS Birmingham. 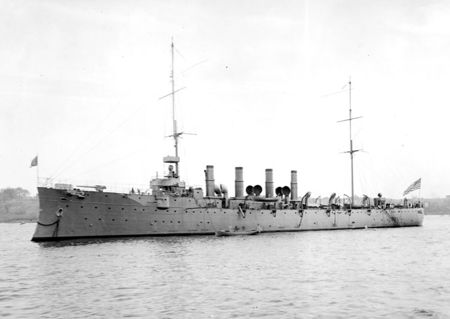 USS Birmingham (CL-2), named for the city of Birmingham, was a Chester-class light cruiser in service to the United States Navy.

The Birmingham was laid down by the Fore River Shipbuilding Company at Quincy in Massachusetts on August 14, 1905, launched on May 29, 1907 by Mrs L. Underwood and commissioned on April 11, 1908, Commander B. T. Wallin in command. The cruiser was 423'-1" long, had a top speed of 24 knots, and was crewed by a complement of 356. She was armed with two 5-inch, six 3-inch, two 3-pounder and two 21-inch torpedo tubes. The open bridge was one level above the main deck.

In November 1910 the cruiser, then helmed by Captain William B. Fletcher, was ordered to proceed from Newport, Rhode Island to the Norfolk Navy Yard in Portsmouth, Virginia in order to participate in an experiment in the prospect of naval aviation. She arrived at port on November 8 and was immediately fitted out with an 83-foot wooden ramp on the forecastle from which civilian aviator Eugene Ely would attempt the first ever take-off from a warship. Ely borrowed Glenn Curtiss' "Hudson Flyer", a Model D "Pusher" biplane, which was equipped with aluminum pontoons and a splash-board. The event was scheduled for November 14. As the Birmingham set out it was accompanied by two torpedo boats and two destroyers. Ely's own 4-cylinder motor was attached to the plane after it was hoisted to the back of the ramp. The group set out into Chesapeake Bay at 11:30 AM, but encountered a squall and laid anchor off of Old Point Comfort to wait it out. At 2:00, with a heavy mist still in the air and a promise of worse to come, the decision was made to proceed. Though the plan was to attempt takeoff into a headwind with the ship moving at 10 knots, the approach of another squall line led Ely to decide to make his attempt from a standstill while the anchor lines were still being pulled in. With the engine roaring, the aircraft was released down the ramp and sunk below sight before rising into the air to cheers from the deck at 3:17. Limited visibility hampered Ely's plan to land back at the Navy Yard. After about five minutes in the air he made his landing on the Willoughby Spit, 10 miles north of Norfolk. He intended to take off again after learning his position, but damage to his propeller prevented him from continuing the flight. Ely was picked up by a launch and brought aboard the U.S.S. Roe destroyer.

The Birmingham continued to serve with the Atlantic Fleet until June 27, 1911 and went into reserve at Boston three days later.

Recommissioned December 15, 1911, she made a short cruise to the West Indies and then reverted to the Atlantic Reserve Fleet at Philadelphia April 20, 1912. During May to July 1912 she was in commission for service on the Ice Patrol and then returned to the Philadelphia Reserve Group. Recommissioned October 1, 1913, Birmingham carried the Panama-Pacific Exposition Commissioners on a South American tour (October 3 to December 26, 1913) and then was outfitted at Philadelphia Navy Yard as a tender to the Torpedo Flotilla.

She left the yard February 2, 1914 and resumed operations with the Atlantic Fleet as flagship of the Torpedo Flotilla. During April and May 1914 she operated with the fleet in Mexican waters. During this time, one of her two Curtiss Model F flying boats performed the first military mission by a US heavier-than-air aircraft, while scouting for mines off Veracruz on April 25. In 1916 she became flagship of Destroyer Force Atlantic Fleet, and Torpedo Flotilla 3.

Following American entrance into World War I, Birmingham patrolled along the northeast coast until June 14, 1917 when she sailed from New York as part of the escort for the first American troop convoy to France. After returning to New York she was fitted for service in Europe and in August reported to Gibraltar as flagship for Rear Admiral A. P. Niblack, Commander, U. S. Forces Gibraltar. She escorted convoys between Gibraltar, the British Isles, and France until the Armistice. After a short cruise in the eastern Mediterranean, she returned to the United States in January 1919.

From July 1919 until May 1922 she was based at San Diego, Calif., as flagship of Destroyer Squadrons, Pacific Fleet, and then moved to Balboa, Canal Zone, as flagship of the Special Service Squadron. After cruising along the Central American and northern South American coast she returned to Philadelphia Navy Yard and was decommissioned there on December 1, 1923, being sold for scrap on May 13, 1930.

See USS Birmingham for other ships of the same name.