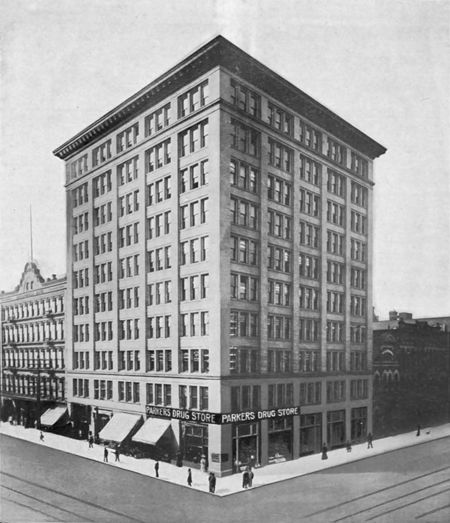 The Woodward Building is a 10-story, 132 foot tall Chicago-style office tower built on the southwest corner of 20th Street and 1st Avenue North in 1902. The building was financed by William Woodward from the proceeds of his sale of Woodward Iron Company, and was one of the earlier designs of architect William Weston, who collaborated with the Stone Brothers, Architects of New Orleans, Louisiana on the design. It was the first steel-framed building erected in Birmingham. As such, the general contractor, Ino Griffiths and Son, was brought down from Chicago, Illinois. The cost of construction was $350,000.

No building yet built in Birmingham was nearly so large or tall, and serious doubts were raised about the ability of the local office market to absorb the added space. The criticisms recalled those that followed the erection of Linn's Folly on the opposite corner 30 years earlier. Nevertheless, the Woodward Building was fully leased at completion and was eagerly followed within a few years by several larger office towers, including three others at the same intersection. 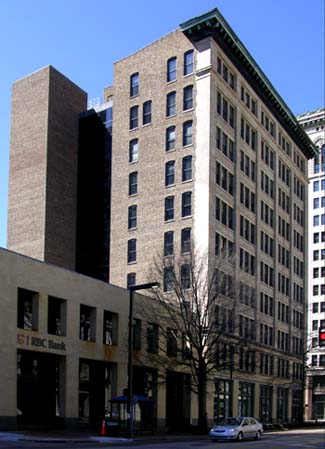 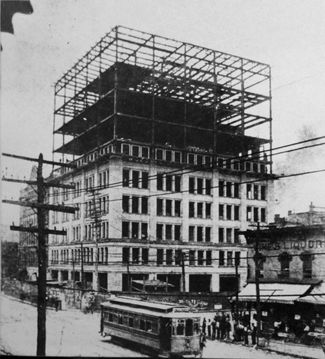 Construction of the Woodward Building, c. 1901

The Woodward Building features a light brown brick façade divided into triple window bays by tall pilasters. The deep cornice is an elaborately-detailed metal construction of the type common in commercial architecture of the time. The interior was finished with tile and marble wainscot in the corridors, oak paneling in the offices, and a monumental wrought-iron and marble stair.

By the time the American Trust and Savings Bank Building was completed in 1912, the four skyscrapers at 20th Street and 1st Avenue were being billed as the "Heaviest Corner in the South." Over the years, that claim was inflated to the improbable "Heaviest Corner on Earth", which remains a popular name for the grouping.

In the 1930s the lower floors were re-clad with dark-green and black polished granite.

On July 29, 1950, shortly after the Birmingham City Commission made membership in the Communist Party a misdemeanor punishable by jail time, an unknown person dropped hundreds of leaflets from the window of a 10th floor bathroom onto the street below. The leaflets, printed by the Alabama Communist Party, urged readers to support India's offer to arbitrate the Korean conflict and the application of China to join the United Nations.

In 1983 the Woodward Building was added to the National Register of Historic Places. In 1985 Doster Construction completed an interior and exterior renovation designed by Kidd, Plosser and Sprague. The new work included a restoration of the first and second levels and the addition of an enclosed parking garage and a two-story curtain-walled extension toward Morris Avenue.

The building presently houses Ligon Industries and the Birmingham offices of PNC Bank.