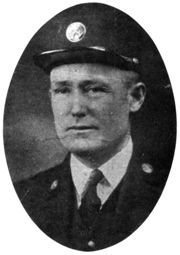 Hargrove was born in Morgan County, where he attended public and normal schools. He joined the Birmingham Fire Department on January 21, 1907 and was assigned to Station No. 3 as a supernumerary, filling in when regular firefighters were unable to report for duty. He was dedicated to the job and quickly was promoted to regular service.

On November 5, 1912 he was promoted to Captain of Station No. 7, and transferred to the same rank at Station No. 15 on May 1, 1913. He became the department's Second Assistant Chief on October 1, 1922. When chief Jim Akin retired in January 1934, First Assistant Alf Brown declined the position, opening up the opportunity for Hargrove to step in. He was sworn in on January 15 of that year. He was in command when the 1934 Loveman's fire broke out on March 10, a major battle which proved to be the costliest blaze in the city's history. William Straiton, an official with the National Board of Fire Underwriters, investigated the fire and commended Hargrove and his staff for their "untiring efforts" in preventing the fire from spreading and protecting the crowds of onlookers.

The highly-visible event prompted public investment in further improving the department's capabilities and Hargrove oversaw the expansion of the city's firefighting forces. By the time Hargrove retired in 1937, Alf Brown was ready to accept the promotion to chief, and succeeded him.