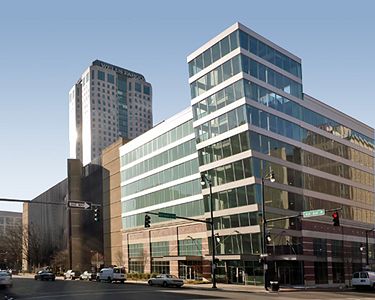 The original deck, with 769 spaces was designed by Cobb, Adams & Benton to complement the style of the adjacent First Alabama Bank Building, for which Cobbs, Adams & Benton were associated architects. The exterior was clad with vertical ribs of bronze-finished aluminum between unfinished concrete corner towers housing staircases. The deck was set back from 20th Street an additional 16 feet to provide better views of the banking tower from the street and to allow for a landscaped terrace to serve as a buffer between pedestrians and the car park. The deck was constructed by the Domit Construction Company and opened on March 1, 1976.

2009 saw the completion of a near doubling of the deck's size over the former Birmingham Parking Authority Lot B. After restriping a total of 602 new spaces were added to the deck while 104 were lost from the surface lot (a net addition of 498 spaces). The project also reconfigured entrances and exits, renewed the existing facades and added new payment and monitoring systems. The Birmingham City Council approved the proposal in December 2006 and accepted a $13.88 million bid from Brasfield & Gorrie to perform the work in March 2008. Construction began two months later. The expansion was planned to support, in part, the conversion of the adjacent Regions Plaza building into a Mariott Renaissance Hotel. Williams-Blackstock Architects designed the addition and renovations, which was dedicated on August 12.