From Bhamwiki
(Redirected from Regions Plaza)
Jump to: navigation, search 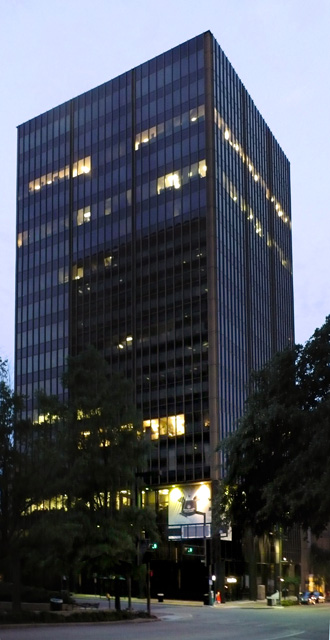 The Plaza, also known as the Viva Health building (formerly the First Alabama Bank Building and Regions Plaza) is an 18-story building which serves as the headquarters of Viva Health. It previously housed First Alabama Bank (now Regions Bank) from 1976 until its merger with AmSouth Bank in 2006. The glass and aluminum-clad building is located at 417 20th Street on the southeast corner of its intersection with 5th Avenue North in downtown Birmingham.

The 240,000 square-foot office tower was completed in 1976 on the site of the landmark Tutwiler Hotel, which had been demolished in the early 1970s for redevelopment. Canal-Randolph Birmingham and First Alabama Bank partnered on the new development. The contractor was the Henry C. Beck Company of Dallas, Texas. The tower's steel frame can be seen under construction in the 1976 feature film Stay Hungry.

The architects for the building were Russell McCaleb & Associates with John Carl Warnecke & Associates of San Francisco, California. A gold-anodized aluminum frame divides the curtain-wall facades into three vertical sections with no cornice termination. A ground-level plaza directs customers towards the Birmingham Parking Authority Deck 3. Typical office floors had 9-foot ceilings with floor-to-ceiling glass on the exterior. The original interior finishes include Italian travertine and red Tennessee marble in the banking lobby. Executive offices were outfitted with suede and natural grass wallcoverings and teak, mahogany and walnut paneling. The chairman's office was constructed with a fireplace.

The building was dedicated in October 1976 and served as the headquarters of First Alabama Bank, which changed its name to Regions Bank in 1992.

On May 25, 2006, Regions announced a merger with AmSouth Bank. The following January it put the Regions Plaza building up for sale and made plans to consolidate headquarters operations into the neighboring Regions Center. The Regions Bank branch on the ground floor of the building closed on July 12, 2007, with its employees and accounts moving with the headquarters.

In April, 2007, it was announced that Harbert Realty Services of Birmingham and Concord Hospitality Enterprises Co. of Raleigh, North Carolina, planned to convert the office building into the four-star Marriott Renaissance Hotel Birmingham. Regions workers completed their move in the summer of 2008.

Plans called for few changes to the exterior of the building, except at the lobby level, which would have been opened up with larger expanses of glass. Along with a completely updated interior, the landscaping around the building was set for extensive upgrades. Architects for the project were Goodwyn, Mills and Cawood. The developer hoped to begin construction in the Fall for completion in late 2009. The estimated cost for the hotel project was $61 million.

Originally slated to have 255 rooms, the developers increased that number to 261 when it presented more detailed plans in late July 2008. As then imagined, the hotel would feature a 1,448 square-foot presidential suite and a 1,238 square-foot governor's suite. 132 king suites and 127 queen suites would make up the remaining guest rooms, occupying floors 5 through 17.

The former chairman's office on the 18th floor would be converted into a 2,100 square-foot Marriott Club Lounge, re-using the original fireplace. The hotel lobby would have a 120-seat Starbucks Coffee shop and a 3,282 square-foot lounge with high ceilings. A second floor grand ballroom would accommodate as many as 717 people in just over 5,000 square feet. The third floor would be divided into meeting rooms while the fourth floor was to be marketed to fitness club operators. A heated swimming pool and spa were planned in a below-ground enclosed area.

The adjacent La Paree restaurant was to be converted into a steak house, managed by an independent operator. In May 2008 a 700-space expansion of the adjacent Birmingham Parking Authority Deck 3, seen as a key to the development's success, broke ground.

In January 2009 developers announced a delay in completing the project as they negotiated with banks for financing. In June of that year, Harbert restated its commitment to the project as it continued to assemble financing. By September, the hotel was still planned but Regions officials were willing to consider alternate proposals. The plan was abandoned when the building was sold in March 2011.

In September 2010, West Second Street Associates of Flint, Michigan announced plans to purchase the tower and renovate it, most likely for federal offices. The deal was closed in March 2011 for $5 million, and a marketing flier from West Second Street indicated that the entire building was for lease. In the wake of the April 27, 2011 tornado outbreak, West Second Street leased space to the Federal Emergency Management Agency (FEMA), who set up statewide headquarters and brought in 900 employees to help with disaster relief.

In early 2017 West Second Street hired Harbert Realty to manage leasing for the building. Later that year the General Services Administration approved a 10-year lease for three floors of the building which will be occupied by the Internal Revenue Service. The agency relocated their local office from Tom Martin Drive near Lakeshore Parkway. Spin Dry Cleaners also signed on as a ground floor retail tenant.

In 2019 the Peoples Bank of Alabama, headquartered in Cullman, opened a retail branch on the ground floor of The Plaza and moved some of its credit and government-guaranteed lending operations from Gardnedale into new offices on the 8th floor.