From Bhamwiki
(Redirected from Regions-Harbert Plaza)
Jump to: navigation, search 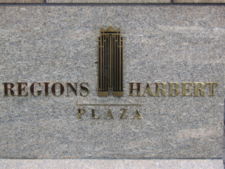 The brown granite cladding stretches from its base to the copper-roofed, pyramid-shaped penthouse. The shape of the roof was inspired by the towers of the nearby 1st Methodist Church and Cathedral Church of the Advent. The large spheres at the corners reproduce an element used on both those towers. The ones on the skyscraper were fabricated in sections from 1/2" thick aluminum, coated in fiberglass to simulate the building's granite cladding. The color of the granite was selected to blend with the colors of the Episcopal church, which sits directly across 20th Street. The Harbert Center on 4th Avenue North was built at the same time of gray granite, and has a similar style of detailing. 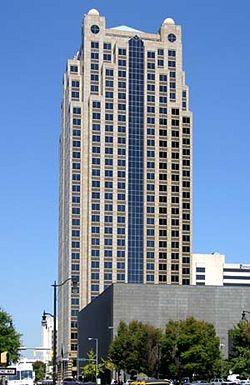