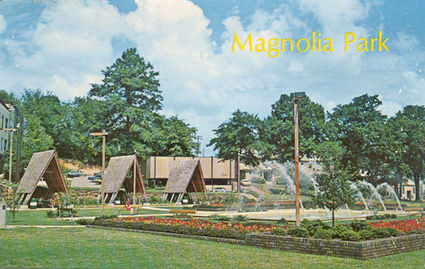 Around the turn of the 19th century, Magnolia Park hosted a small animal menagerie kept by the firemen working from Birmingham Fire Station No. 3. The collection, considered a predecessor to the Birmingham Zoo, was removed after neighbors complained of the noise and odor.

Workers employed by the Civil Works Administration trimmed trees at Magnolia Park in 1934.

The unremarkable park was beautified in 1971 with the addition of a fenced playground, decorative pools, lighting, and three A-frame, cedar-clad picnic shelters. A tunnel below 21st Street South gave children a safer route to the park from Five Points South. The improvements were designed by Carl Mattil, horticulturist for the Birmingham Park and Recreation Board.

In 1989 the park was renamed in honor of James Bryan, who was well-known for ministering selflessly to the people of Birmingham from 1889 until his death in 1941.

Brother Bryan Park is often used as a rallying point for public demonstrations and events, such as the annual Magic City AIDS Walk and United for Life Rally and March.