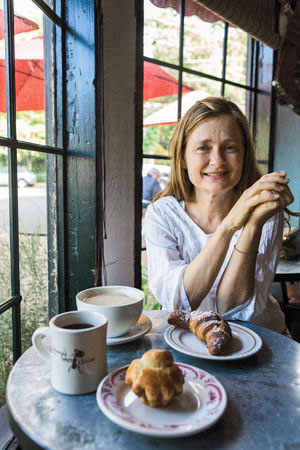 Griffin grew up in the Central Park and Green Acres neighborhoods of West End. She was one of the first female students at Indian Springs School, graduating in 1978. She earned a bachelor's degree in English and French at Rice University in Houston, Texas in 1983 and then moved to Austin, intending to train as a midwife. Instead she found work in a commercial bakery and found a love for breads. She subsequently spent time in France learning to bake artisanal breads in the style of Lionel Poilâne.

After returning to Alabama, Griffin played with The Janes and fronted the pop band Sugar La-Las. With a loan from her grandmother, she opened her bakery in English Village in 1985 and created a signature wild yeast sourdough which is served at Highlands Bar and Grill and other fine restaurants. She expanded with a neighboring restaurant in 1995 and briefly operated a location in Bluff Park.

Griffin founded the Spring-a-Ling-a-Ding-Dong festival in English Village to celebrate the bakery's 25th anniversary in 2009. In late 2013 Griffin was invited to take over Chris Dupont's lease for Mix bakery at One Federal Place. She opened the second Continental Bakery location there in January 2014 and moved the Spring festival to 19th Street North that year. After the downtown location closed, the festival returned to Mountain Brook.