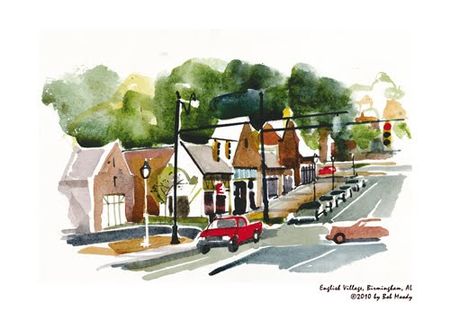 English Village, along with Mountain Brook Village and Crestline Village, is one of three "village" commercial districts in Mountain Brook. English Village is located on the southern slope of Red Mountain, along Cahaba Road (formerly Pump House Road) around 20th and 21st Avenues South, in a small spur of northwest Mountain Brook surrounded largely by the Birmingham city limits.

English Village formed in the 1920s near the site of the older Hedona mine camp and Birmingham Mineral Railroad stop. Charles R. Byrd & Co. planned and developed the first block reserved for business uses, with 50-foot lots going up for sale on August 16, 1926. Restrictive deeds required business houses to, "conform to the English type of architecture". Soon the district hosted four filling stations, two grocery stores, and a dairy store.

In 2006, Mountain Brook began examining the possibility of having English Village designated as an historic district. The nearby neighborhoods of Redmont Park, Altamont, and Hollywood are already designated as historic districts, and Redmont Garden Apartments on the village's east side are on the National Register of Historic Places.