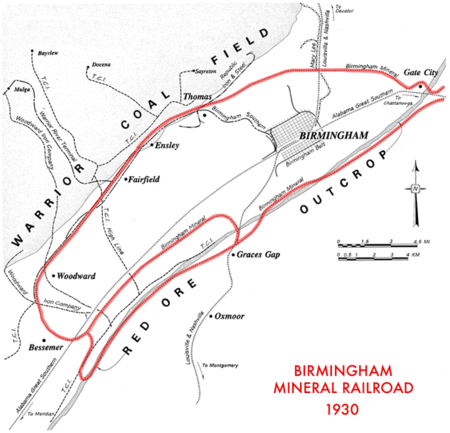 The Birmingham Mineral Railroad in 1930

As a means of securing freight traffic, L & N made it a policy to market mineral-rich lands and to extend railway connections to industrial enterprises that located on them. As developed by L & N's president, Milton Smith, the mineral railroad's primary purpose was to connect Red Mountain's ore mines and nearby coking ovens to the furnaces located along the edge of the Warrior Coal Fields in Jones Valley.

The Birmingham Mineral Railroad was chartered for business as an operating division of the L & N on March 19, 1884. G. D. Fitzhugh was elected president and R. W. A. Wilda was secretary-treasurer. Construction of the North Branch began at Magella on the north face of Red Mountain. The South Branch was constructed simultaneously from the Redding Mine northeast to Grace's Gap. These first sections were constructed with 58-pound rail on a 5'-0" gauge. They were converted to standard gauge heavy rail, along with L&N's other Southern trackage, in 1886. Several branches and spurs were constructed to mine headings and ore crushers along the mountain. Expansion of the railroad was directed by Tennessee Coal, Iron and Railroad Company president John Inman, who was a director of L & N between 1885 and 1895. In return for a major expansion of the railway to encircle the mountain, Inman promised an exclusive freight contract with TCI.

The railroad connected to the L & N's main line near Grace's Gap, between Birmingham and Oxmoor. It looped around the western section of Red Mountain at Reader's Gap, accessing numerous red ore mines stretching southwest to Brickyard Junction near Bessemer. A larger loop curved north past Sloss Mines and over Village Creek toward Woodward. It followed the Warrior Coal Fields past Fairfield, Ensley and Thomas.

A major extension begun in 1887 closed the loop across North Birmingham and toward Gate City and Irondale east of Birmingham. Another line continued on the north slope of Red Mountain toward Green Springs Valley View Mine and Lone Pine Gap, where it crossed over 18th Street South and switched over to the south slope. From there the line, known as the Red Gap Branch made its way on up toward Ruffner Mountain and Trussville.

Various branches of the main loop continued to be added as late as 1917, including spurs to Wenonah (Fossil), Spring Gap, Ishkooda, and Muscoda. Extensions of the line carried traffic as far as Chepultepec Depot in present-day Oneonta. The railroad's circuit and primary branches encompassed 156 miles of track, constructed at a total cost of $6,063,890.00. 55.7 miles of the railroad were laid on Red Mountain.

In 1904 the Birmingham Mineral Railroad division was subsumed back into the Louisville & Nashville Railroad, which had just been bought by the Atlantic Coastline Railroad. TCI purchased some of the interior spurs, totaling 8.7 miles, on June 30, 1917. That purchase prompted the Woodward Iron Company to sink the vertical Redding Shaft from the southern face of Red Mountain, restoring access from its Songo No. 1 Mine to L&N's South Branch. TCI expanded its private rails by constructing the TCI High Line in the mid 1920s. After World War I and the Great Depression a number of Red Mountain ore mines and nearby quarries were abandoned, greatly reducing freight carriage.

Beginning in the 1930s, the railroad ceased to operate and sections of the line were dismantled. The 18th Street bridge was removed in 1933 when the street was widened. A former bridge abutment is still visible on the east side of the Street. In 1946 a group of residents near Mountain Brook's English Village complained that the railroad's operations at Hedona constituted a nuisance. The Red Gap Branch between there and Irondale was abandoned in 1953 and the tracks taken up by the end of Summer 1954.

The Gate City Branch between Boyles and Ruffner No. 2 Mine was abandoned in 1984. Small sections of the North Branch are still utilized sparingly by Jim Walter Resources between Blue Creek Junction and Brookwood.

Part of the western section of the railbed, beginning at Vulcan Park, was re-surfaced, beginning in 2003, as Vulcan Trail, a walking trail with views of the city. Sections of the rail bed further to the west are planned to be re-used as walking trails in the proposed Red Mountain Park. In the east, part of the roadbed has been re-used as a walking path in front of Trinity Medical Center and other sections, within the Ruffner Mountain Nature Preserve, have been left to return to nature. Beyond the park, a section in the Shady Wood subdivision, off Lance Boulevard was formerly used by residents as a walking trail but has since become overgrown.

Other parts of the railroad bed are being used as hiking trails in Red Mountain Park. The former Woodlawn Depot was moved to the Heart of Dixie Railroad Museum in Calera and currently houses the Bill Boone Memorial Railroad Library.