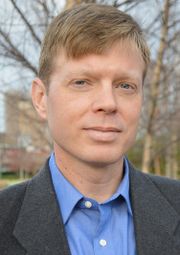 Darrell O'Quinn (born July 17, 1972 in Baton Rouge, Louisiana) is a clinical veterinarian at UAB, president of the Birmingham Citizens Advisory Board, and a candidate for Birmingham City Council District 5 in the 2017 Birmingham municipal election.

O'Quinn graduated from Denham Springs High School just east of Baton Rouge in 1990. He enrolled at Louisiana State University where he completed a bachelor's degree in zoology in 1995 and a Doctor of Veterinary Medicine in 2000. He then came to UAB where he completed a Ph.D. in cellular and molecular pathology in 2005. He was worked as a senior clinical veterinarian for the university's animal resources programs since 2011.

O'Quinn has also been very active in civic organizations. He has been vice-president or president of the Crestwood North Neighborhood Association since 2008, a member of the Implementation Committee for the Birmingham Comprehensive Plan since 2014, and president of the Citizens Advisory Board since 2015. He also serves on the boards of Greater Crestwood, Inc., Keep Birmingham Beautiful, and the Deep South Cancer Foundation and co-founded Heart to Table with Marco Morosini. He is a former board member of Redemptive Cycles and former executive director of Move I-20/59. He was a member of the 2015 class of Leadership Birmingham.

O'Quinn formerly published the Ultra-Local News and operated the Crestwood Produce Co-op from 2004 to 2005 and co-founded The35212 newsletter. He is an avid cyclist and has lived in Crestwood North since 2001 with his wife, Kristina and two children.

As a candidate for City Council, O'Quinn has touted his experience with collaboration on civic projects and his commitment to accountability and transparency.