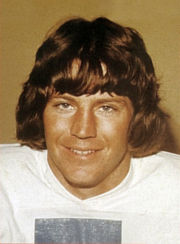 Ralph Dieter Brock (born February 12 or 15, 1951 in Birmingham or Gadsden) is a former professional football player and current coach. He is best remembered as the quarterback for the Canadian Football League's Winnipeg Blue Bombers where he led the league in passing for four years.

Brock was the son of Billy William Brock and his German wife, Maria. Growing up, he used the name "Ralph" and only began using his middle name during his CFL career. He attended Auburn University, but sat on the bench behind star quarterback Pat Sullivan until he transferred to Jacksonville State University, graduating in 1974.

By-passed in the World Football League draft, Brock signed a one-year contract with the Winnipeg Blue Bombers of the CFL. He started his pro football career as a little used back-up quarterback for the Bombers in 1974. That season the team traded away their aging star passer Don Jonas to the Hamilton Tiger-Cats for the much younger Chuck Ealey. About midway through the 1975 season Brock became the starter and Ealey was sent to the Toronto Argonauts. Brock remained the full-time starter, thriving in the CFL's growing dependence on passing. Nicknamed "The Birmingham Rifle", Brock is the only Blue Bombers player to win back-to-back CFL Most Outstanding Player awards in the 1980 and 1981 CFL seasons. In 1981, with a new $1.2 million, five-year contract, Brock broke Sam Etcheverry's 1956 record of 4,723 passing yards by 3 yards.

In 1983, Brock was traded to the Hamilton Tiger-Cats for quarterback Tom Clements. This trade led to an exciting Grey Cup in 1984, as the Tiger-Cats and Blue Bombers faced each other in the championship game. Brock's Tiger-Cat team lost the game to Clements's Blue Bombers and Brock ended his career with many accomplishments, but without a Grey Cup victory.

In 1985 Brock played for the Los Angeles Rams for one season of a 4-year $2.1 million four-year contract before retiring from football. Technically a rookie during his one season with the Rams, Brock led the team to an NFC Championship Game match-up with the Chicago Bears, and set team rookie records for passing yards (2,658), touchdown passes (16), and passer rating (81.8).

Brock began his coaching career as offensive coordinator for the UAB Blazers in 1994. He returned to the Hamilton Tiger Cats in the same capacity for the 1995 and 1996 season. He coached the Ottawa Rough Riders offense in 1997 and was hired as coordinator for the Alabama State Hornets the following season.

In 1999 Brock coached at Meadowview Christian School. In 2000 he was hired by the Edmonton Eskimos as a co-offensive coordinator and quarterbacks coach. In 2006 he accepted a coordinator's position at Tusculum College in East Tennessee. Since then he has coached at Cumberland University in Lebanon, Tennessee and Smiths Station High School in Lee County. Brock also worked as an offensive consultant to the Birmingham Wildfire in 2010.