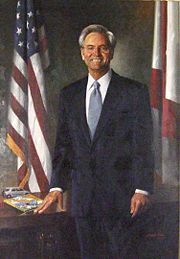 Before his imprisonment, Siegelman resided in Vestavia Hills with his wife, the former Lori Allen, and their two children.

Don Siegelman was born and grew up in Mobile. He graduated from the University of Alabama in 1968, and from Georgetown University Law School. he also studied international law at Oxford. While at Alabama, Siegelman served as President of the Student Government Association. While in law school at Georgetown, Siegelman worked as an officer of the United States Capitol Police.

During the 1998 election, Siegelman centered his campaign on his proposal to establish a lottery with the proceeds funding free tuition at state universities for most high school graduates. After winning the race, he supported a bill that placed the lottery on a free-standing referendum ballot in 1999. The measure was defeated in a special election.

For the rest of his term, Siegelman's ability to present a balanced budget was dogged by low tax revenues resulting from a recession in the national economy. He did succeed in creating the Alabama Reading Initiative, an early education literacy program that was praised by both Democratic and Republican officials, and emulated by several other states. Also, Siegelman was able to make good on a campaign promise to eliminate virtually all portable classrooms in the state's public schools.

The signature achievement of Siegelman's term, however, may be his role in the state's ongoing success with recruiting automotive manufacturers. Toyota, Honda, and Hyundai all committed to building factories in Alabama following efforts that Siegelman participated in heavily.

Siegelman was defeated in the election of November 2002 by U. S. Representative Bob Riley in one of the Alabama's closest statewide elections. The outcome was controversial. Though initial returns showed Riley losing to Siegelman, officials in Baldwin County claimed to have found a computer glitch and to have recounted votes, turning the statewide result in Riley's favor. Largely as a result of this controversy, the Alabama Legislature later amended the election code to provide for automatic, supervised recounts in close races.

Siegelman was a candidate in the 2006 Democratic primary. His opponent was current Lieutenant Governor Lucy Baxley. Despite the indictments, which Siegelman said were politically motivated, he showed strongly in voter polls. In a Survey USA poll released on May 11, 2006, he was leading Baxley by ±8%. He ended up with 36.3% of the vote, finishing a distant second to Baxley's 60%.

On May 27, 2004, Siegelman was indicted on federal charges of participating in a bid-rigging scheme with Paul Hamrick, his former chief of staff, and Phillip Bobo, a major contributor to his political campaigns. After several delays and three separate judges, his trial began in October 2004. When the judge declared the bulk of the prosecutor's evidence inadmissable, all charges were dropped.

On October 26, 2005, Siegelman was indicted on charges of racketeering, bribery, and extortion, along with his former chief of staff Paul Hamrick, former state transportation director Gary "Mack" Roberts, and former HealthSouth CEO Richard Scrushy. The indictment alleges that bribes were exchanged for official favors from Siegelman during his term as Governor. Additional charges of mail fraud and conspiracy were added during a December 12 grand jury, alleging that Siegelman conspired with Scrushy to give HealthSouth undue influence on the state's hospital regulatory board.

United States Attorney Leura Garrett Canary recused herself from the case because her husband, Bill Canary, employed by the Business Council of Alabama, managed Bob Riley's 2002 campaign. The case went to trial in the courtroom of Mark Fuller in early May 2006 and concluded in late June. The jury took 11 days to reach decisions on 62 counts. Siegelman and Scrushy both received multiple convictions while Roberts and Hamrick were exonerated. Lawyers for both guilty parties promised to appeal the verdict.

On June 28, 2007 Siegelman was sentenced to 88 months imprisonment followed by 36 months on probation. He was also fined $50,000 and ordered to pay $181,325 in restitution and to perform 500 hours of community service. He was initially incarcerated in a federal prison in Atlanta. On July 11, 2007, he was transferred to Oakdale Correctional Complex, a low security prison in central Louisiana.

After serving almost nine months in prison, Siegelman was released on appeal on March 27, 2008 by U.S. Judges Susan H. Black and Stanley Marcus of the 11th Circuit Court of Appeals. The judges stated that Seigelman met the requirements of an appeal bond. The House Judiciary Committee began investigating allegations that partisans in the Justice Department pursued cases against Democrats for political reasons, and Siegelman's was one of several cases under scrutiny. Before his release, House Judiciary Committee Chairman Representative John Conyers of Michigan asked the Justice Department to transport Siegelman from prison to Capitol Hill for a hearing later that spring.

Siegelman remained imprisoned until given a conditional release into supervised probation in February 2017.