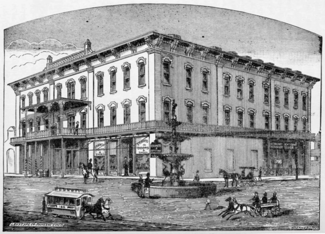 Engraving of the Florence Hotel in 1886 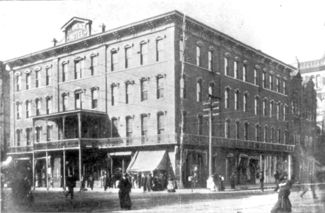 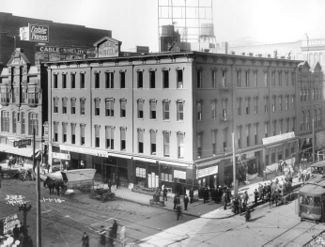 The Florence Hotel or Florence House, founded in 1883 and opened in 1884, was a four-story hotel located on the northwest corner of 19th Street and 2nd Avenue North in downtown Birmingham. The brick building was ornamented with wrought-iron balconies and metal window mouldings and cornices. A free-standing gable above the cornice on the 2nd Avenue side announced the hotel's name.

The Florence Hotel could sleep 170 guests and had a 96-seat dining room and bar called the Indian Room. The upper floors were served by a passenger elevator and all rooms had electric light. It was reported that "the sanitary arrangements were as perfect as men can make them," according to "the requirements of the most recent dicta of science." The office was well-appointed with a lofty wood ceiling. Much of the ground floor was leased out for retail businesses. Outside the hotel, a monumental cast-iron fountain donated to the city by T. L. Hudgins was installed.

The hotel was named in memory of Florence Earle Mudd, the daughter of Samuel Earle and wife of William S. Mudd, who built the hotel on its 100 by 140-foot lot. It opened under the management of Campbell & Yeates in April 1884, but on August 21 of that year was taken over by J. T. Nixon. Mudd died in September and the property passed to his daughters, Florence (wife of Mortimer Jordan Jr), Virginia (wife of William L. Walker) and Susie (wife of Pette Basil Clarke and, later, John Rivers Carter).

Later, ownership of the hotel was passed to J. F. B. Jackson, president of the Birmingham Gas Company and Enterprise Manufacturing Company and Colonel McCurdy, owner of a cotton plantation in Lowndes County. O. F. Hickle was hired as hotel manager, with W. H. Millspaugh assisting as clerk. The brokerage offices of Pinckard, DeBardeleben & Co. occupied part of the first floor.

On March 20, 1887 a delegation of African-American pastors visited the hotel to welcome Ohio senator John Sherman. The group, which included A. L. Scott, William Pettiford, J. M. Goodloe, A. J. Headon, A. D. Jemison and R. Donald, was denied entry by the hotel's management. The incident was widely reported and criticized. Sherman removed to the Metropolitan Hotel and was there able to receive his guests.

The hotel was also the site, during the 1891 Southern Baptist Convention, of the committee meeting at which the Southern Baptist Sunday School Board was founded. On June 12, 1894 the hotel's bar was the site of an altercation between former Mayor Thomas Jeffers and attorney Peyton Bowman. Bowman later shot and killed Jeffers' son, Eugene. He was charged with murder, but acquitted on grounds of self-defense.

The opening of the Caldwell Hotel in 1889 cut into the Florence's business, and the hotel nearly went bankrupt during the 1893 financial panic, despite the Caldwell's destruction by fire in July 1894. The opening of the Hillman Hotel in 1900 again threatened the Florence. R. B. Jones was proprietor of the hotel in 1903. Robert Forman operated the hotel until 1905, charging $2 and $2.50 per day for rooms on the "American Plan".

When Burnett's lease expired on January 1, 1916 the building was set for demolition to make way for the Louis Saks Clothing Company. The site is now the IMAX Dome theater for the McWane Science Center.

A New Florence Hotel, a block away, opened subsequently, but was not related to the original.