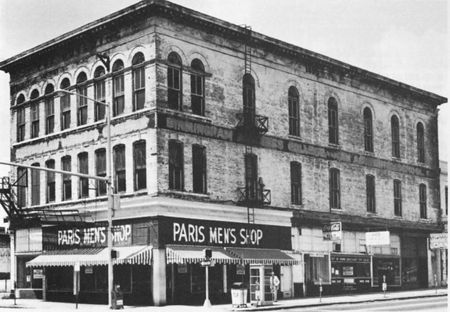 The Fox Building was a 3-story brick commercial building located on the northwest corner of 19th Street and 4th Avenue North on lots 18 & 19 of Block 61 in downtown Birmingham. It was constructed in 1895 for John Fox's Sons Groceries, which had been founded near the Alice Furnace in 1888 by John Fox and his three sons, John George, David and William. David Fox served as Mayor of Birmingham from 1892-1894. The brothers' namesake building was constructed the following year.

The Fox Building was designed in a late-Victorian interpretation of the Italian Renaissance "Palazzo" style. Its stout brick walls were supplemented with large cast—iron columns between the ground floor openings. The second floor was divided into 8 bays with tall double-hung windows capped with segmental arches with projecting keystones. The top floor had the same number windows with half-circle transoms above a stone banding which tied together the pilaster capitals. The arches were protected by projecting round moldings and the parapet was crowned with a deep pressed-metal cornice with garlands on the frieze and dentils supporting the eaves. The name "FOX BUILDING" ran across the frieze on the front of the building, facing 4th Avenue, and the date "1895" was centered on the longer 19th Street facade. The size of the structure and its location at the edge of the city's commercial district led to it being called the city's second "folly" (after Linn's Folly).

After moving in, John Fox's Sons Groceries became the city's largest grocery store and meat market. The upper floor was sometimes used as a meeting house, called Fox's Hall. The space hosted the 1903 joint convention of the Alabama District of the United Mine Workers of America and the Alabama Coal Operators Association, which was attended by UMWA president John Mitchell.

The grocery closed in 1910 and the building was remodeled in 1912 as a market house by the Jemison Real Estate & Insurance Company. A U-shaped array of interior partitions divided the ground floor into small stalls for food vendors. Shoppers roamed the central aisle while vendors had access to a perimeter corridor running to the alley entrance for stocking.

After the market closed, the building hosted a succession of businesses including a drug store and barber shop. The Birmingham Business College kept offices on the 2nd floor. The Chicago Clothing Company, the Ellis Book Store, a shoe store, a few finance companies (or pawnbrokers) and the Paris Men's Shop also used the address. The open upper floor, called the Third Loft, was rented out for community meetings, stage productions, concerts and worship services, including the first services of what became the West End Church of Christ and the meetings of Fidelity Lodge No. 7 of the International Order of Machinists.

Ownership of the building was passed to the Sloss-Shephard Real Estate Company in 1946. Robert Shepherd recalled that as long as he had known of it, that the building had been considered a "white elephant" with little intrinsic value. By the 1970s, the building was in poor condition with boarded-up windows, cracked brick and holes in the roof.

In 1975 the Board of Governors for the Birmingham Branch of the Federal Reserve Bank of Atlanta approved plans by the local branch to begin acquiring all the other parcels on Block 61 for future expansion. The long-vacant Fox Building was purchased by the bank in March 1978 for $350,000.

On August 17, 1979 the Bama Demolition Company obtained a permit from the city and began preparations to raze the building. Soon a "Committee to Save the Fox Building" was formed, helped by Alabama School of Fine Arts director James Nelson. They succeeded in having the demolition permit suspended on August 30 while alternatives to demolition were explored. The city's offer to purchase the building at a discounted price was turned down and no other viable offers appeared.

They got the structure listed on the National Register of Historic Places, effective August 11, 1980. Meanwhile the Birmingham City Council voted down a proposal by John Katapodis to condemn the building and the demolition permit was restored. Supporters of the bank's plans believed that the Federal Reserve might move their operations out of downtown if their expansion plans were stymied. (In fact, the bank did move to Liberty Park in 2000.)

In September 1980 the committee filed suit in U.S. District Court to argue that the bank had not fulfilled requirements established to restrict Federal agencies from destroying listed properties. Ultimately Judge U. W. Clemon ruled that the objections had come too late to justify reversing the bank's plans. The Fox Building was demolished in 1981. Restaurant G at One Federal Place was constructed on the site in 2002.