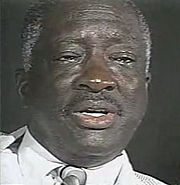 Dukes was the third of eight children born to a Fairfield steelworker's family. He was a graduate of Fairfield Industrial High School served in US Army from 1949 to 1950. After his discharge he worked for Dodge in Detroit, Michigan. In 1954 he re-enlisted for the Korean War and served until 1957. He returned to Detroit, but, after being laid off in 1958 he came home to Fairfield to wait for his recall.

Instead he decided in 1959 to enroll at Miles under the GI Bill. With his broader perspective on justice, and inspired by student protests in North Carolina, Dukes began urging fellow students to engage in public opposition to segregation in Birmingham. He formed an Anti-Injustice Committee at the college and began formulating demands, including the desegregation of public buildings and businesses and the hiring of African Americans in stores and government departments. Dukes and his committee met with Sidney Smyer, James Head, Emil Hess, Roper Dial and other white business leaders. When those meetings proved unproductive, the committee organized a Selective Buying Campaign at downtown stores in early 1962.

Dukes approached the Birmingham Chamber of Commerce for information on department stores "for a school project". He learned that merchants operated on about a 12-15% margin while black shoppers accounted for about 25% of sales. Because "boycotts" as such were illegal, Dukes' AIC published leaflets proposing "selective buying" to as a form of demonstration, knowing that if they caused a 50% decrease in black spending, that the stores' profits would vanish. The group coordinated closely with the Alabama Christian Movement for Human Rights and was advised by its founder, Fred Shuttlesworth. It was also advised by Miles president Lucius Pitts. In addition to the direct impact of lost sales to African American customers, publicity about the plans for demonstrations in the streets scared away some number of white shoppers.

The boycott deeply cut into revenues for downtown stores and, though the merchants were often individually sympathetic to their black customers's complaints, they were reluctant to be perceived as capitulating to the demands of protesters. The result of the actions, therefore, was minimal. No black workers were hired, but signs enforcing segregated restrooms and water fountains were removed from many stores (though some were later replaced). More importantly the movement helped organize the African American community and provided a precedent for successful public demonstrations and the economic influence of the black community.

In December 1961 Dukes had drafted a public statement entitled "This We Believe" which called for more educational and employment opportunities for African Americans. During the Selective Buying Campaign that statement was signed by hundreds of students and other citizens. When it was presented to the Birmingham City Commission, Commissioner Bull Connor responded with racial slurs and advised Dukes to go back North.

During the Selective Buying Campaign, Dukes was visited by members of the Southern Christian Leadership Conference to gauge the readiness of Birmingham for massive non-violent demonstrations. After the conclusion of the campaign, Dukes informed them that he thought the city was ready. During the SCLC and ACMHR's Birmingham Campaign, Dukes served both as a campus organizer and as an armed guard, protecting leaders during meetings. He was one of four leaders of a mass march from Thirgood Memorial CME Church on Easter Sunday, April 14, and was arrested along with A. D. King, Nelson Smith and John Porter.

Dukes graduated in 1962 and was hired by Pitts as Miles' Director of Public Affairs and Alumni Affairs that June. He later entered the ministry. He married Jacquelyn Bates in 1969 and had one daughter, Donna.