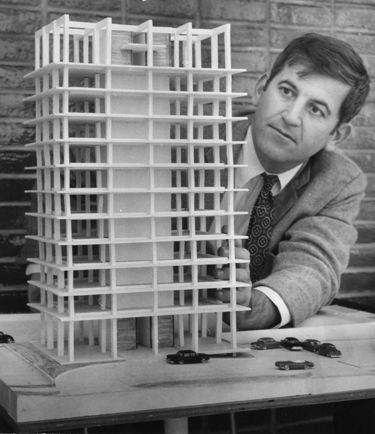 Fritz Woehle (born 1929 in Harrisburg, Pennsylvania; died December 7, 2017 in Birmingham) was an architect and the owner of The Garages, where The Garage bar is located.

Fritz was one of four sons born to Max and Alma Woehle of Pennsylvania. The family moved to Delray Beach, Florida when he was 10 years old and he earned his architecture degree at the University of Florida. After graduating, Woehle joined the U.S. Marine Corps. He moved to Birmingham in 1958 with a commission for the new Pilgrim Congregational Church on Montclair Road. His boldly modern A-frame design became easily recognizable for its bright blue roof. He followed that with the 7-story Doctors' Center building on 18th Street South, noted for its cantilevered concrete floor slabs and a concrete frame that extended above the the roof. Woehle moved his own office into the building's penthouse.

At the height of his career in the late 1950s and early 1960s Woehle was a well-known figure in local design issues, weighing in against the demolition of the Birmingham Terminal Station, retrieving the Japanese Pavilion after the 1964 New York World's Fair for the Japanese Garden at the Birmingham Botanical Gardens, and serving as president of AIA Birmingham in 1967. Woehle was the only local architect to enter the 1966 international competition to design the Birmingham-Jefferson Civic Center. Woehle served on the Mountain Brook Planning Commission and chaired the AIA Design Committee in 1972.

Woehle also served as vice president of the Birmingham Botanical Society and as a member of the boards of the Birmingham Museum of Art, Birmingham Art Association and Birmingham Children's Theater. As an executive committee member of Operation New Birmingham he chaired the annual Sidewalk Art Show. He taught at the Red Mountain School and represented Alabama on the American Craftsman's Council.

Woehle purchased the former parking court on 10th Terrace South in the mid-1970s, and converted part of the space into his design office while renting out other spaces to a variety of small businesses. The rest of the property was used for his growing collection of architectural fragments and antiques. The collection is now a centerpiece of the courtyard café.

For his contributions to the profession, Woehle was honored in 1975 as the first Fellow of the American Institute of Architects from Alabama. Woehle and his wife, Lynn raised three children: Lee, Fritz Jr, and Kay (who now owns and operates The Garage bar.)

Woehle died in December 2017 and is buried at Elmwood Cemetery.