Pilgrim Church, UCC is a congregation of approximately 100 to 125 members located at 2817 6th Avenue South. It had been previously located on Montclair Road, just inside the Mountain Brook city limits; and several locations in downtown Birmingham prior to the 1950s. It holds membership in the United Church of Christ denomination.

The congregation was dormant from 1915 to 1928 (though in part of this period an apparently unrelated Pilgrim Congregational Church existed in Gate City). During this period of dormancy, Independent Presbyterian Church was established along similar theological lines. A reorganized United Church of Birmingham, Christian-Congregational (UCBCC) began holdings services in 1928 in the downtown YMCA.

In 1931, a significant number of members from First Presbyterian Church left with their pastor in a split with the session. They organized a new body called the Congregational Community Church, but soon later joined forces with the UCBCC. Together they leased, and eventually bought the Axis Club building at 1819 8th Avenue North. The formal merger took place in 1937 under the Pilgrim Congregational Church name.

Because the Axis Club building was in serious disrepair, the church elected to have it demolished and build a full sanctuary on the 8th Avenue North site, which happened in 1941. By then, over 300 people belonged to Pilgrim Church, watching a number of pastors come and go. The new building was plagued by vibration damage from heavy truck traffic on the nearby highways. By 1954 the church had secured a 6.5-acre parcel on Montclair Road and began plans for yet another new building. 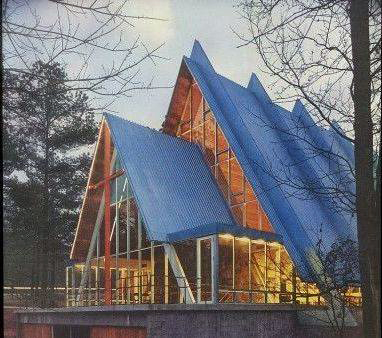 In 1959 the church left its then-condemned downtown site and built a new $300,000 building on the Montclair Road property. The steep A-frame design by architect Fritz Woehle won a 1961 Festival of Arts merit award for industrial architecture. The steel panel roofing, with its distinctive blue coating, was used in a 1960 advertisement for the National Steel Corporation in the Wall Street Journal. Pilgrim capitalized on its unique appearance by nicknaming itself "The Blue Roof Church."

After its move to the edge of Mountain Brook, Pilgrim Church established in the new building a day school in 1963, one of the first in the Birmingham area. The mid-1960s also witnessed division in the church over the newly-formed United Church of Christ's (successor to the Congregational Christian Churches) intense activity on behalf of Civil Rights. After some conservative members failed to withdraw Pilgrim Church from the UCC, the congregation underwent yet another period of decline. However, by the early 1970s, things stabilized as the remaining members began to understand, and eventually identify with, the UCC's orientation toward social justice. The church also began to intentionally engage in mission projects such as purchasing a house in the Inglenook neighborhood in the late 1970s to provide suitable housing for a handicapped couple, something that would have been quite impossible in earlier years.

However, older individuals and families began to die off or move away and were generally not replaced by new members throughout much of the 1970s and 1980s. In the late 1980s, Pilgrim Church once again divided, this time over its pastor's homosexuality. Although that pastor eventually resigned, much of the membership, possibly tired of periodic conflicts, left for other churches; this reduced the membership down to about 100 people. The early 1990s would witness a renewed stability under a pastor who formerly served as a missionary to South Africa and Botswana. After his resignation, though, the church underwent a new series of crises, namely a series of short-lived pastorates and the aging of the steel-frame sanctuary and fellowship hall. The situation became so dire at one point after a failed one-year pastorate that an Anglican congregation approached Pilgrim Church about buying its property under the anticipation that Pilgrim Church might close; the congregation turned the request down.

Pilgrim Church strengthened its progressive-liberal identification by reaching out to the area's artistic and intellectual community. In 2001 It formally adopted a designation as "Open and Affirming," a program by a UCC advocacy group to encourage acceptance of homosexual orientation. By positioning itself as one of the area's most theologically liberal fellowships, Pilgrim Church filled an admittedly small niche addressed by very few other churches in the Birmingham area, even within mainline Protestant denominations, whose congregations in Alabama are usually much more conservative than elsewhere in the U.S.

Move from Suburb to City, 2008-present

Because of a relatively low potential for growth at its location (which was some distance away from Interstates 65 and 20 and Highways 31 and 280, making the church relatively inaccessible to much of the metropolitan area) and the increased costs of maintaining the 1959 structure, in 2007, the church sold its Montclair Road property to developer Bruce MacClary for $3.8 million. MacClary demolished the building in February 2008 and began work on the construction of 15 residences on the site, which was dubbed "Pilgrim Place." Rather than just simply tear down the building, MacClary hired a recycling specialist to take it apart and re-use as much of it as possible. The cedar ceiling was remilled for use in the new construction. The steel beams and other metal, including the aluminum roof, were shredded for re-use. The stone and concrete were ground up and re-used. Playground equipment and the church pews were donated to other organizations.

The church used about a third of the proceeds from the sale to secure a new location, and pledged to use the remainder to support missions work and church operations. The church's day school closed some months before, in May 2007.

Pilgrim Church's final worship service on Montclair Road took place on December 30, 2007. Services were held in the annex of Southside Baptist Church, another liberally-inclined congregation with which Pilgrim had cordial relations in the past, for about two and a half years. After moving to Southside Baptist, the congregation voted to remove the word "Congregational" from its name, in order to emphasize its current denominational affiliation and deter possible confusion on the part of potential members. According to members, the name change also represents a new identity as the congregation seeks to reestablish itself in an urban setting.

In late 2009, Pilgrim purchased a building at 2817 6th Avenue South. The church held its first worship service there on May 23, 2010, on the celebration of Pentecost. 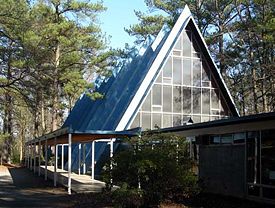 Former location on Montclair Road in 2007