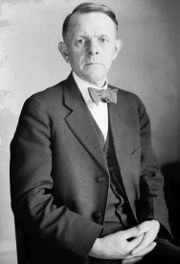 George Samuel Huddleston Sr (born November 11, 1869 near Lebanon, Tennessee; died February 29, 1960) was an attorney, member of the Birmingham Board of Aldermen, and Representative of the 9th Congressional District of Alabama in Congress from 1915 to 1937.

Huddleston was the son of Joseph Franklin and Nancy Emeline Sherrill Huddleston of Tennessee. He attended the common schools and the Cumberland School of Law. He was admitted to the bar in Birmingham in 1891 and served in the First Regiment, Alabama Volunteer Infantry during the Spanish-American War before he ran for office. Huddleston retired from practicing law in 1911.

Huddleston was elected to the 64th Congress from Alabama's 9th District in 1914 and was re-elected to ten more terms. He was generally progressive in his votes and advocated for relief for sharecroppers during the Great Depression. Huddleston was defeated by Luther Patrick in the 1936 general election.

He was a Freemason, a Knight of Pythias, an Oddfellow, and a member of the Redmen. He and his wife, the former Bertha Baxley, had five children: Nancy, Jane, Mary, George Jr and John.

Huddleston died in 1960 and is buried at Elmwood Cemetery.