The Good People Brewing Company is a Birmingham-based brewery located at 114 14th Street, at the corner of 2nd Avenue South in the area of Birmingham's Railroad Park and Regions Field.

Good People grew out of a homebrewing hobby shared by Auburn University graduates Jason Malone and Mike Sellers. They began operating professionally in September 2007 at the former Southside Cellar Brewing Company location in Pickwick Plaza on Magnolia Avenue. The company's first brew, a brown ale, made its official debut at the July 4, 2008 celebration organized by the Five Points South Merchants Association. Good People Pale Ale was the first beer to become generally available, starting at the Five Points Grill and the J. Clyde on Cobb Lane. Other restaurants, bars and select liquor stores now carry the beer, which is distributed by the Birmingham Beverage Company. 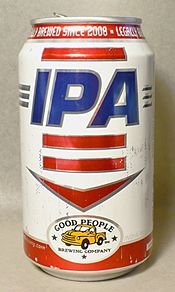 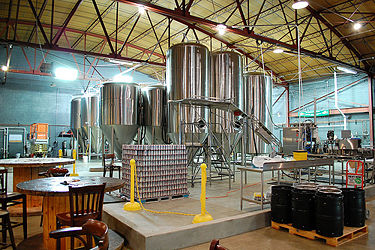 Inside the Good People Brewing Company brewery in October 2012. Photo by Gottfried not Bouillion.

Southside Cellar's equipment, which still had seven-year-old beer in it when Good People moved into the space, included eight 7 bbl fermenters and two 7 bbl bright tanks with a total capacity of 250-300 kegs per month. Spent grain from the mash is recycled as compost, which feeds hop vines at Jones Valley Urban Farm, which then go back into the beer.

In May 2010 Good People moved to its current location, a much larger former warehouse near the Railroad Park, and increased capacity by adding three 20 bbl fermenting tanks. Canning equipment was installed, allowing the company to ship its first retail products to stores in February 2011. The first 600 cases sold out in a matter of days at area retailers, including Highland Package Store and Piggly Wiggly on Clairmont Avenue.

Following the success of Free the Hops-sponsored brewery legislation, the brewery opened for tours, tastings and events. In late 2012 the brewery tripled its production capacity to 15,000 barrels per year as it prepared for region-wide distribution. In early 2013 it opened its first off-site pub, operated by HMSHost, on Concourse A of the renovated Birmingham-Shuttlesworth International Airport.

In 2014 Good People Brewing Company opened a quality control and yeast development lab at Innovation Depot. In 2015 it moved that function into newly-equipped space at the brewery. Spence Overton is the company's quality control manager.