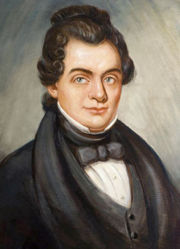 Joshua Lanier Martin (born December 5, 1799 in Blount County, Tennessee; died November 2, 1856 in Tuscaloosa) was a U. S. Congressman and the 12th Governor of Alabama, serving from 1845 to 1847. He is remembered for having overseen the dissolution of the Alabama State Bank.

Martin, a descendent of French immigrants who changed their name from "Montaigne", was born in Tennessee and educated by local ministers. He and his family moved to Alabama in 1819 and he married, first to the former Mary Gillam Mason, and then to her sister, Sarah Ann. He had seven children.

Martin studied law with his brother in Russellville, Franklin County and, after being admitted to the Alabama State Bar, opened an office in Athens, Limestone County. He was elected to represent that county in the Alabama House of Representatives in 1822 and continued to serve in the legislature, except for one term, until 1828 when he was elected solicitor to the Fourth Judicial Circuit.

In 1833 Martin was elected to the Circuit Court. Two years later he went to represent the 2nd Congressional District of Alabama in the United States House of Representatives, and was re-elected in 1837. He left office in 1839, but was elected to Alabama's Middle Chancery Division in 1841.

Martin ran for Governor at a time when the previously popular and profitable State Bank was in peril. The Depression of 1837 had exposed some of its unwarranted risks and the legislature had allowed its charter to expire in 1845. Pro-bank delegates to the Democratic party convention in Tuscaloosa nominated Nathaniel Terry for Governor before their anti-bank colleagues arrived. Whigs were split between Terry's support for rechartering the bank and his role in passing a General Ticket Law that reduced their representation in Congress. Their party made no nomination, but Nicholas Davis pulled 665 votes in the Whig ticket. Martin, representing the anti-bank factions of both parties, ran as an independent candidate and won the 1845 general election by a margin of 4,674 of the 56,513 votes cast.

Perceived as "disloyal" by many in the Democratic party, Martin's term in office was contentious. He focused on the task of dismantling the state bank and protecting the state's credit. His other primary role was in raising a Alabama State Militia to help answer President Polk's call for soldiers to fight in the Mexican War. He also oversaw the privatization of the Alabama State Penitentiary in Wetumpka, and was governor when the capital was moved from Tuscaloosa to Montgomery. Martin planned to seek re-election, but without the support of the Democratic Party, he withdrew from the race. He settled in Tuscaloosa and resumed his law practice.

In 1853 Martin was returned to the State House of Representatives, but he died after three years. He is buried at Evergreen Cemetery in Tuscaloosa.