This article is about the attorney. For others with similar names, see Matt Murphy. 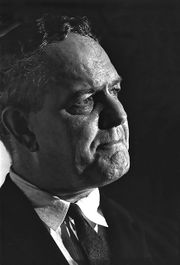 Matthew Hobson Murphy Jr (born August 13, 1913; died August 20, 1965 in Tuscaloosa County) was an attorney, known for defending members of the Ku Klux Klan in criminal trials, for which he was given the title "Imperial Klonsel".

Murphy was the son of Matthew and Ellen Percy Murphy of Birmingham. He served as a Captain in a field artillery unit during World War II. He lost three fingers of one hand during his service.

Early in his career, Murphy, who followed his father into the Klan as well as into practice of law, defended both white and African-American clients. One black Civil Rights attorney even credited Murphy with helping him gain his license. Later in his career he became more closely associated with the Klan, sometimes wearing a scarlet robe into court. In the 1960s, especially after he divorced his wife, the former Mary Ellen Dunkin, friends watched as he began "to see conspiracy everywhere."

Murphy was killed when his convertible collided with a tanker truck north of Tuscaloosa in August 1965. At the time of his death he was defending Collie Wilkins in a murder trial for the death of Civil Rights activist Viola Liuzzo in Selma. Klan leader Robert Shelton and National States Rights Party founder Edward Fields attended his funeral in Birmingham. He was buried in Greensboro Cemetery in Hale County.

Murphy was survived by his mother and three children.