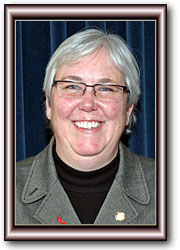 Patricia Todd (born July 25, 1955 in Richmond, Kentucky) represents House District 54 in the Alabama House of Representatives. She is also the Director of Development for AIDS Alabama and the former Executive Director of Birmingham AIDS Outreach.

Todd grew up in Richmond, Kentucky, graduating from the Model High School in that city. She earned her Bachelor's degree in political science from the University of Kentucky. She was active in the movement for an equal rights amendment to the U.S. constitution during the 1970s and has remained an activist.

She moved to Birmingham in 1986 and assumed the Directorship of Birmingham AIDS Outreach. She earned her Master's degree from UAB in public administration in 1994, researching "The Impact of Ryan White Care Act Funding on Alabama" for her thesis. She has also served as the program director for the Central Alabama Women's Business Center and worked with the Alabama Humanities Foundation and the National Organization for Women. In 1998 she was named UAB's Director of Alumni Affairs. She ran a computer training business called One on One for a while, as well.

In the 1986 gubernatorial campaign she served as a field coordinator for Bill Baxley and was a delegate for John Kerry's 2004 presidential bid. She is also the Secretary of the Crestwood South Neighborhood Association. She founded the Alabama Stonewall Democrats and was elected as a delegate to the 2004 Democratic National Convention.

While lobbying the state legislature in opposition to a proposed constitutional amendment to prohibit gay marriage, Todd and her colleagues were taken aback by their treatment and realized that "we would never change that conversation unless we were sitting at the table."

She won the most votes in the primary election on June 6, 2006 and faced Gaynell Hendricks in a runoff. After the primary she won endorsements from defeated opponents Kamau Afrika and Charlie Williams Jr, both of whom stated that they were looking beyond race to endorse the candidate whose platform most closely fit their concerns.

The result of the runoff was an apparent win for Todd with a narrow margin of only 59 votes of the 2,287 cast. After a week of studying the results, Hendricks' mother-in-law, Mattie Childress, filed a contest with the state Democratic Party, alleging improper ballot-handling procedures and noting Todd's filing of financial information after the runoff showing a large and potentially controversial deposit from the Gay & Lesbian Victory Fund and payments for "consulting" to Afrika and Williams.

On August 24, a Democratic party subcommittee heard Hendricks' revised challenge. Most of the issues named in the initial contest were retracted, leaving as the sole issue a 1970s party by-law requiring financial information to be submitted to the party chairman five days prior to the election. For all practical purposes, the by-law was superceded by the 1988 Fair Campaign Practices Act and had not been followed by any candidate running for any office since 1988. Nevertheless, the subcommittee voted 5-0 to disqualify Todd.

The State Democratic Executive Committee voted on August 26, largely along racial lines, to overturn the subcommittee's ruling. Todd was certified as the Democratic candidate for the office and, with no opponent on the general election ballot, became the first openly gay member of the Alabama House of Representatives.

In July 2007 The UAB School of Public Health gave Todd the inaugural Wooster Award for service in the field of public health. In 2008 she was named "Freshman Legislator of the Year" by the Alabama House Democratic Caucus.

Todd and her long-term partner, Jen, were married in Provincetown, Massachusetts on September 14, 2013.

Todd announced in January 2018 that she would not seek re-election. She cited the inability to hold a full-time job while serving in the legislature as a reason for stepping aside. She accepted an offer to serve as the first executive director of the One Orlando Alliance beginning on June 1. After she made a social media post repeating rumors that Governor Kay Ivey was gay, however, the board of that organization voted to rescind the offer. In a statement they said, "We strongly believe that coming out is a personal choice and we do not support involuntarily outing."