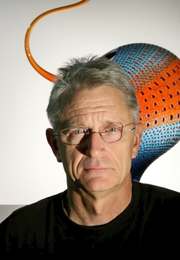 Powell was the son of Birmingham-Southern College drama professor Arnold Powell, and grew up in Birmingham. He is named for John Rolfe, the English colonist who married Pocahontas, and from whom (according to family tradition), the Powells are descended.

After graduating from Indian Springs School, Powell went to Danville, Kentucky for art school at Centre College, receiving a bachelor of arts in painting in 1974. He returned to Birmingham, executing large-scale paintings on his own and earning his teaching certificate from Birmingham-Southern. Later he conducted art programs at Draper Correctional Facility in Elmore, and worked briefly as an art teacher at Indian Springs. He then went to Louisiana State University where he earned a Master of Fine Arts in ceramics, working chiefly with raku. While in school he began experimenting with glassblowing. LSU was beginning a glass program at the time, but Powell found more inspiration at other places, such as Haystack, Penland, and Tulane, where he worked with Gene Koss.

Powell visited the Rothko Chapel in Houston and had an epiphany about the superiority of glass over paint for producing color effects. In 1983 he joined the faculty at Centre College, and was working exclusively in glass, bringing to the medium the gestural vibrancy of "action painters" like Pollock and de Kooning. He continued to study glassblowing techniques at Summervail in Colorado and at Pilchuck in Stanwood, Washington, where he assisted Dan Dailey and Lino Tagliapietra. Three of his vessels from that period were featured in Corning's New Glass Review.

Inspired by Tagliapietra and Richard Marquis, Powell began adding murrini (segments of multi-colored drawn-glass strands) to his vessels to increase their complexity of surface. The process of wrapping cylinders of glass with colored beads before blowing became his hallmark as his style matured toward color fields, recalling Rothko more than Pollock. The thicker layers of color provided a depth to the vessel surface which evoked organic or geologic bodies. Powell was instrumental in bringing Tagliapietra to Danville as a visiting artist. He documented the visit in the film Lino Tagliapietra: Glass Maestro.

In 1990, Powell accepted a teaching post at the Muhkina Glass Institute in Leningrad, Russia and the Lvov Glass Factory and Art Institute in Lvov, Ukraine. There he confronted the distinction between the artist as conceiver and the craftsman as maker - a tradition in Russian and Ukrainian glass work. He determined to investigate the craft of glassblowing while he was there, and was able to greatly increase the size of his works.

Powell built Kentucky's largest kiln, able to fire over 2,000 pots at one, on his 44-acre farm near Danville. The theme of fire, central to his work in glass, which was mostly executed at night, also manifested itself in frequent bonfires and pyrotechnic displays at festivals he hosted on the property. In 1991 Powell was badly injured by a broken window pane while trying to free a pigeon from his studio. He required extensive hand surgery and months of rehabilitation to recover.

Powell was twice named "Professor of the Year" by Kentucky's Council for the Advancement and Support of Teaching. He was also presented with the Acorn Award for outstanding professor at a Kentucky college in 2002, and received the Distinguished Educator award from the James Renwick Alliance in 2012.

Powell's works, including "Peacock Gasp Johnson", are part of the permanent collection of the Birmingham Museum of Art. He was represented locally by Gallerie Alegria in English Village.

Powell died in March 2019. He was survived by his wife, Shelly, and two children, Piper and Oliver.