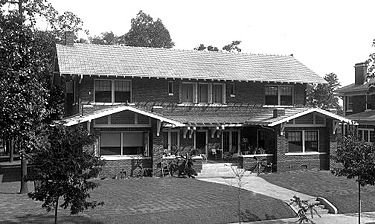 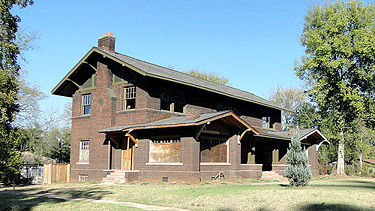 The Abernathy residence in 2010

The T. S. Abernathy residence (also known as the Abernathy-Carraway House or Carraway House) is a two-story brick-clad Craftsman-style home built in 1916 on Norwood Boulevard in Birmingham's Norwood neighborhood.

The house was constructed for T. S. Abernathy, president of the Strand Theater Company. It was designed by architects Jake Salie and Philip Mewhinney. The house includes three baths, two sleeping porches, a music room and sunroom.

A later owner was unable to keep up with the house's maintenance and abandoned the property, which fell deeper into disrepair. A fire spread from a squatter's cooking fire over half the roof in 2006. The damaged structure was condemned in May 2007 by the city of Birmingham, and appeared on the Alabama Historical Commission's "Places in Peril" list for that year.

Tom Creger and Ken Harris hired a title search company to locate the owner and purchased it during the summer. They hired a contractor to replace the damaged roof, but he absconded with his payment after the bundles of shingles he stacked on the roof caused another cave-in.