Talladega Superspeedway (formerly the Alabama International Motor Speedway) is a motorsports complex located near I-20 just north of Talladega. Opened in 1969, the track is the largest speedway on the NASCAR Nextel Cup series circuit. Its long straightaways and steep banks have also made it the fastest track on the tour, giving rise to the use of restrictor plates to limit racing speeds. The premiere races at Talladega include the Aaron's 499 in the spring and Good Sam Club 500 in the fall. Continual expansion has brought the track's current seating capacity to over 175,000.

The International Motorsports Hall of Fame is adjacent to the Talladega Superspeedway. 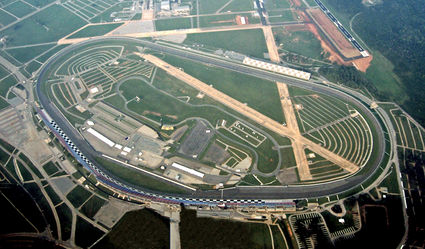 Aerial view of the Talladega Superspeedway in 2007

The track is a "tri-oval", or elongated oval with one side, the west, "stretched" out into a third curve which hugs the grandstands and is clipped by pit row. Drivers face east-southeast at the start and make a 155° circuit through turns one and two to the north, down the long straightaway on the far side of the track. Turns three and four, also 155°, bring them back into the grandstand area, also called the "tri-oval", which curves more gently around the pit and back to the start line.

Unlike most NASCAR tracks, in which pit road spans the start/finish line, Talladega has its finish line located just after the pit road exit.

The entire circuit is banked toward the center, with the first two turns pitched at 33° from horizontal. The second two, which were long assumed to be the same, were recently measured at 32.4° and 32.5°. The tri-oval area has a 16.5° bank (significantly lower than the 18° previously published) while the straigtaways are banked at 3°.

In the mid 1960s, the International Speedway Corporation, a company controlled by the family of NASCAR founder Bill France began looking for sites in the Southeast for a major speedway. Anniston insurance executive Bill Ward brought their attention to a disused World War II-era airstrip among soybean farms north of Talladega. With the support of Talladega mayor James Hardwick and other city officials, Ward got the site approved and, once financing was in place, construction on the $4 million project began with a groundbreaking ceremony on May 23, 1968.

Talladega got off to a controversial start when the Professional Drivers Association, a union of drivers led by Richard Petty, went on strike the night before the inaugural Talladega 500. The union was concerned with the speed which could be attained due to the track's length and steep banking, and the perceived threat to driver safety that this posed. NASCAR founder Bill France took to the track himself in a car and drove around it at high speeds. NASCAR also ran a successful support race, but it was not enough, and the PDA drivers went on strike.

France went ahead with the race on September 13, 1969, inviting non-striking drivers and racers from the previous day's race to fill in. Richard Brickhouse earned his sole NASCAR victory in that race. France's refusal to negotiate led to the dissolution of the PDA a few years later.

Restrictor plates and "The Big One"

Speeds well in excess of 200 mph became commonplace at Talladega. Bill Elliott set a record for the fastest recorded time in a stock car on April 30, 1987 when he was clocked at 212.809 mph during qualifying. In the ensuing race, Bobby Allison's Buick flew into the catch fence, causing injuries to fans in the stands.

In 1988, NASCAR imposed rule changes to slow the cars at Talladega and Daytona by requiring restrictor plates to limit the amount of air and fuel entering the engine. With an effective upper limit to engine power and acceleration, more cars are able to maintain speed with the lead group. The result is a bunched-up pack -- sometimes four-wide through most of the field -- which hampers a driver's control and multiplies the impact of a collision. The fear of a massive multi-car wreck, "The Big One", is always present at Talladega.

In Summer 2006, Talladega Superspeedway was repaved. The new surface has been called "as smooth as glass" and has improved handling as well as overall speed. The post-1988 speed record was set on Friday, October 6, 2006 by Jeff Gordon, who was clocked at 198.689 MPH during qualifying.

BE&K completed a $13 million grandstand upgrade in 2010, adding new premium box seating on the west side of the tri-oval.

In 2018 the facility broke ground on a $50 million improvement project for the infield, including a new tunnel for oversize vehicles at Turn 3. 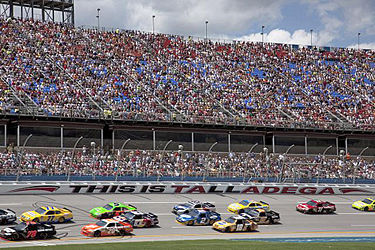 The Winston 500 was known as one of the sport's four legs of the traditional "Winston Million", with the Daytona 500, Coca-Cola 600, and the Southern 500 being the other three. With the demise of the Southern 500 by a lawsuit, there are only three majors remaining. (From 1985 until 1997, a driver who won three of the four majors won a one million dollar bonus.)