The restuarant was first opened in the space formerly occupied by Roma Italian Bistro in June 2009 by Brian Somershield and Geoff Lockert, childhood friends from Chagrin Falls, Ohio.

Somershield came to Birmingham in 2004 after graduating from culinary school. He had dined at Highlands Bar and Grill during a vacation on the Robert Trent Jones Golf Trail and knew that he wanted to work for chef Frank Stitt. He spent two years at Highlands and then became head sous chef at Chez Fonfon in 2006. Lockert also spent some time as a server at Fonfon before continuing his training at Michael Symon's Lola restaurant in Cleveland.

The restaurant opened with the name "Za Za", using Cleveland-area slang for "pizza". They changed the name in January 2010 to avoid a future legal fight with Montgomery's "Sa Za" which had tentative plans to franchise statewide. 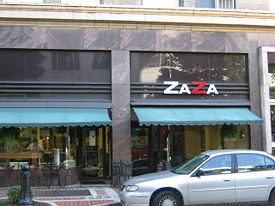 Under their ownership, Trattoria Centrale featured a selection of fresh pizzas (served by the slice), pasta dishes and salads each day, as well as a daily hot special. The line-up varied seasonally featuring locally-sourced ingredients. Breakfast options included omelets and frittati as well as fresh fruit, hash browns and baked goods. Later a dinner service was added on Fridays. Coffee drinks, made with Higher Ground coffees and Wright's Dairy milk, were prepared on a 3 foot-tall copper-clad Italian espresso machine.

Lockert and Somershield sold the business to long-time employees Erica Schmidt and Bryan Stanfield, effective October 12, 2015. In February 2019 the restaurant closed for remodeling and expansion, concurrent with Orchestra Partners' redevelopment of the Frank Nelson Building as "The Frank". The layout was reconfigured and 500 square feet was added.

The restaurant reopened as Trattoria ZaZa in August 2019. The breakfast and lunch service on Mondays and Wednesdays through Fridays, and the weekend brunch menu remained relatively unchanged, but a nightly dinner service was added with an expanded menu featuring nightly specials.