From Bhamwiki
(Redirected from 5 Points South)
Jump to: navigation, search

Five Points South in September 2008, before being painted red. 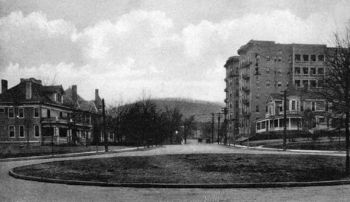 Five Points Circle in the 1910s 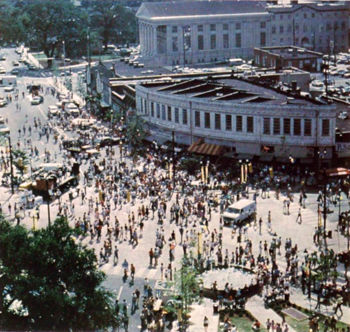 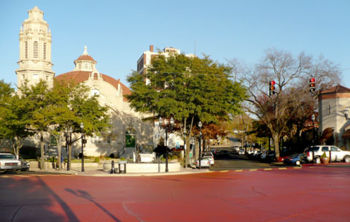 The circle painted red in November 2008

Originally a busy streetcar hub in the then-suburban town of Highland, Five Points Circle has always been an active location and a landmark. Mid-rise apartments grew up alongside boarding homes and stately townhouses sharing easy access to transport. Churches and offices also took advantage of the location. The district's commercial development was pioneered by N. W. Henry's grocery store in the 1890s, and expanded by the Munger family in the 1920s as automobile traffic began to compete with streetcars.

Traffic congestion at the circle was exacerbated by the growth of "Over the Mountain" suburban residential communities such as Homewood, Mountain Brook and Vestavia Hills. Occasional proposals to improve motor access to Shades Valley percolated and various committees began studying the alternatives of widening and improving 20th Street and even constructing a tunnel through Red Mountain. Sergeant Ben Robinson of the city's traffic engineering division drew up a proposal for converting the intersection into a true traffic circle. Because the city itself had "no plans for instituting the idea," he sent it to the Red Mountain Tunnel Committee for their consideration.

During the middle of the 20th century the Southside area, with Five Points South at its heart, became known as a refuge for bohemian living. Students and faculty from the emerging UAB campus nearby helped fuel a "golden era" of counterculture. Locally-owned businesses came and went, a few becoming institutions in the neighborhood while more and more mainstream shoppers headed "over the mountain" to spend their money.

By the 1970s the district was moribund. Its architecture, by then "historic", was recognized as an asset and area residents began laying the groundwork for protecting it in concert with commercial revitalization. Over the next decades a series of important development transformed the area into Birmingham's premier entertainment district with fine dining and numerous nightclubs.

More recently, with the district has been described as a place that changes character depending on the time of day. During the day and early evening the area's dining options attract crowds of office workers and visitors. On weekends daytime churchgoers yield to evening diners and clubgoers, while late at night the streets are filled with teenagers cruising and packing into dance clubs. In the late 1980s, the area around the fountain was frequented at night by "punks and skinheads". Overt panhandling, criminal activity and a generally threatening atmosphere have continued to be widely reported, leading some to frequent other areas perceived as safer.

In order to combat those factors, the Five Points South Merchants Association has campaigned to draw people back to the district and lobbied the city to improve street and sidewalk maintenance and security. Those efforts were drawn into sharp relief early on the morning of July 5, 2008. Just hours after a block party planned by the association welcomed families to view the Thunder on the Mountain fireworks display from Five Points South a nightclub brawl at Banana Joe's spilled out into the parking lot and two men were killed by gunfire.

In November 2008 the city repaved all the streets in the immediate vicinity of Five Points South, repainted traffic signals and lampposts in the district, and covered the Five Points circle and patterned concrete sidewalks around it with bright red paint as part of an effort to dress up the area in advance of the annual PapaJohns.com Bowl. A UAB Blazers logo was painted on the circle in preparation for the 2010 homecoming game on November 6.