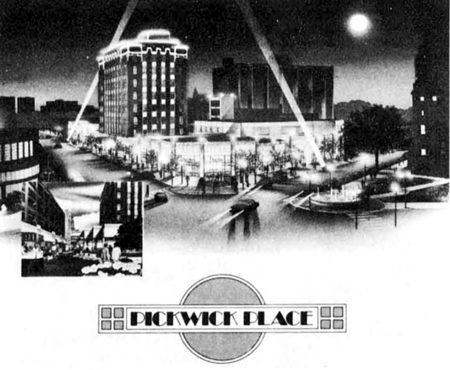 Pickwick Place was developed in 1987 by Dr Donald Kahn, who wanted to construct a European-style shopping center at the site. The development was designed by Kidd, Plosser, Sprague architects in an Art Deco style inspired by the former Pickwick Club, a dance club which operated nearby in the 1930s-1950s. The $9 million project was supported with funds from Birmingham's Historical Preservation Development Authority.

Development of the center included the conversion of the Medical Arts Building into a hotel, originally called the Pickwick Hotel. A tiled plaza was built connecting the hotel to the 4-level 5 Points South Parking Deck, with several retail spaces and meeting rooms for the hotel.

In 2008 Kahn's daughter Gayle, president of Kahn Properties, began a remodeling of Pickwick Place. Changes included replacing tile on the walkways with stained concrete, removal of awnings, planters and decorative archways to open up the space, and the addition of new signage, lighting and security cameras. The name was changed at that time to reflect general usage.