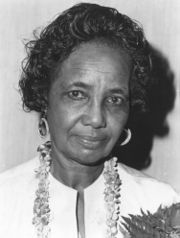 Bessie Sears Estell (born April 20, 1902 in Greene County; died March 29, 1982) was an educator and a member of the Birmingham Public Library Board and the Birmingham City Council.

Estell's father, Reverend Milton Sears, was called to serve as pastor of Bethel Baptist Church in Collegeville. She graduated from Parker High School and went on earn a teaching degree at Lincoln Normal School (now Alabama State University) in Montgomery. She worked as a teacher in Birmingham City Schools and became principal of Butler Elementary School in Avondale, and later of Center Street Middle School, retiring in 1974. Estell served as president of the Alabama State Teachers Association and as national secretary of the National Baptist Convention's "Congress of Christian Education". She also served as charter director of the ASU Foundation and as president of ASU's Birmingham Alumnae chapter.

In the early 1970s Estell served as a member of the board of the Birmingham Public Library. She was elected to a two-year term on the Birmingham City Council in 1975 Birmingham municipal election, and re-elected for a four-year term in 1977. She did not run in the 1981 election.

Estell died in 1982 and is buried at Elmwood Cemetery. In 1960 Hayes High School's "Future Teachers of America" chapter was named in Estell's honor. Bessie Estell Park in Glen Iris and Bessie Sears Estell Hall at Alabama State University are named in her memory.