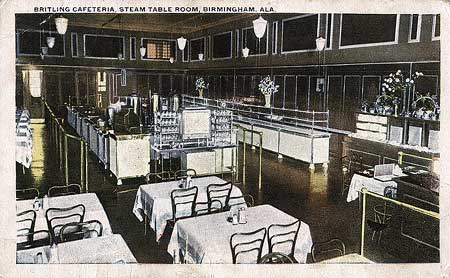 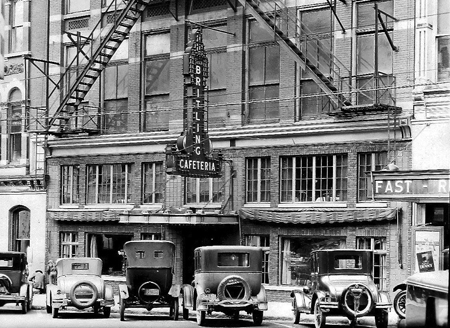 Britling Cafeterias was a chain of cafeteria restaurants founded in Birmingham in 1917 by A. W. B. Johnson of the Steel Smith Dry Goods Company. Johnson's first location, in a downtown department store, was the first cafeteria-style self-service restaurant in the South. At the suggestion of a friend from Louisville, Kentucky, he named the restaurant after the title character in H. G. Wells' novel Mr Britling Sees It Through.

Johnson moved the Britling Cafeteria No. 1 to the Potter Building at 1913-17 1st Avenue North in 1919. The grand opening of the new 280-seat location was celebrated on July 11 with 2,000 meals served on the first day. Not long afterward, though, Johnson ran into financial trouble. Colonel Thomas O. Smith, president of Birmingham Trust National Bank, recruited young automobile dealer John Holcomb Sr to take over the operation of the restaurant.

Johnson moved to Memphis, Tennessee in the early 1920s to open additional locations while Holcomb oversaw the restaurant in Birmingham. He opened the second Birmingham location on 20th Street North, and then added another dining room on 3rd Avenue North that shared the same kitchen. Holcomb dissolved his partnership with Johnson in the 1930s, keeping the rights to the Birmingham locations.

Britling offered live performances at its 1st Avenue location and provided electric organs to entertain diners at its other locations before switching to recorded music. In their heyday, Britling cafeterias were a local institution in Birmingham and Memphis, particularly the downtown locations. A 1927 account revealed that the restaurants did the most business on Mondays, Thursdays and Saturdays. "Monday's bring to town the housewives seeking bargains from the retail merchants. Thursdays bring cook's night off and so has become in many Birmingham homes 'Britling Night'. Saturday is half-holiday for many employees and they like to take plenty of time for luncheon, and then there are the matinees."

During the Great Depression Holcomb began a tradition of serving a free hot breakfast to Birmingham's needy from the main downtown location. He and his family would join other volunteers to prepare and serve the meal. The tradition ended with John Holcomb Jr's retirement in 1975.

The Highland Avenue location in Birmingham was a popular gathering spot in the 1940s and 1950s, even featuring live music and seating in a balcony overlooking the main floor. Sunday afternoon lunch at Britling eclipsed "cook's night off" as a local dining tradition. The chain capitalized on its popularity among young children by sponsoring the "Romper Room" program on WAPI-TV. Children who finished a glass of milk during their visit received a specially-marked card which, after it was filled, could be redeemed for a ceramic mug with the Britling logo on one side and Romper Room's jack-in-the-box on the other.

Neighborhood residents protested rezoning a site on Montgomery Highway at Mayfair Drive in Homewood for a proposed suburban Britling restaruant. The chain opened a "Britling Holiday Inn" location in the downtown Holiday Inn motel in 1963. The kitchen at that restaurant was designed to be "all electric", with microwave ovens, electric steamers and rangers, automated coffee urns and other "flameless" appliances supplied with planning assistance from Alabama Power Company. In the following year, Holcomb opened a new $450,000 "Britling West" location at Five Points West, near the entrance to the Five Points West Shopping City.

The chain fell into decline in the late 1970s, as fast food restaurants became increasingly popular and widespread. Britling tried to counter this trend by expanding into suburban locations in Birmingham and Memphis, a move that was successful for a time. In Birmingham, the chain had locations in popular shopping centers such as Eastwood Mall (two locations, one at each end of the mall), Western Hills Mall, the small Hoover Mall on Montgomery Highway in Hoover, the Mountain Brook Shopping Center and Five Points West. The Britling Company also operated snack bars in two downtown office buildings, three Holiday Inn restaurants, and one Howard Johnson restaurant.

These eventually became the only locations, as the two downtown restaurants were closed in the 1960s. Memphis saw the company take the same action, with several locations in suburban shopping centers eventually replacing the downtown restaurants. As the company struggled against the competition, the remaining cafeterias were converted into all-you-can-eat buffets; this was done with at least three Memphis locations and the one remaining Birmingham-area store in Hoover in the 1980s. The measure was only successful in the short term, and Britling finally closed or sold off its Memphis and Huntsville locations. The Hoover location was sold to former manager Ted Battle, and became Battle Buffet, which itself closed in the early 1990s. 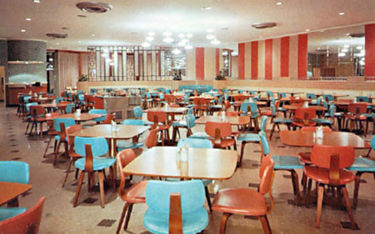 Interior of Britling on the Highlands

Rendering for Britling West, built in 1964.