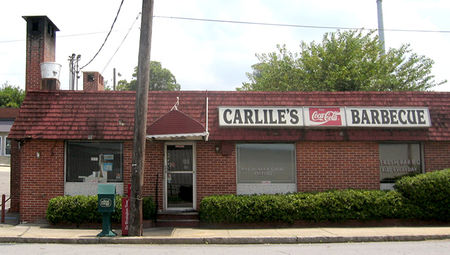 Carlile's Barbecue is a barbecue restaurant located at 3511 6th Avenue South in Birmingham's Lakeview district. It was founded in 1945 by World War II veterans Warren Carlisle and Herman Carlile. The brothers used different spellings of their surname due to an error made by the U.S. military, and settled on the shorter version for their business.

The restaurant moved from its rented space across 35th Street to its present location in 1950. Warren's son, Richard Carlile began working in the restaurant in 1952, followed shortly by his siblings, Joe, Jimmy, Freida and Ruby. During the 1960s the rear part of the restaurant, which had formerly served as the Carlile's residence, was converted into the Anchor Lounge and became a watering hole for local businessmen and journalists.

In 1969 Robert and Warren began working on plans to expand the restaurant's menu, which would be done when Richard returned home from overseas duty with the military. Before the expansion took place, however, Warren suffered his 3rd heart attack and became unable to take an active role in the business.

Warren and Herman sold the restaurant in 1974 to Anita Evans, who sold it to her daughter, Vickie in 1995. In 1976 Richard Carlile and his wife, Susan, opened a new "Carlile's Restaurant" in Scottsboro which realized many of the plans developed by his uncles. That restaurant closed in 2009 when they retired. A third-generation Carlile's Restaurant was opened by their son Rob Carlile in October 2011.

In 2000, Vickie Evans married Joe Fuller, a former aide and campaign manager for Mayor George Seibels and professional sports promoter. Fuller decorated the restaurant with dozens of photos of Birmingham's political and sports history from his sizable collection. They sold the restaurant to Meyer Electric executives Glenn Goedecke and Charles Collat in 2007.

Notable customers of Carlile's have included actress Dinah Shore, President George W. Bush (who had a package of Carlile's barbecue delivered to Air Force One during his 2001 visit to Birmingham), and singer-songwriter Lyle Lovett.

The restaurant suffered minor damage from an October 20, 2010 fire. Charlie Collat Jr announced a rebranding for the restaurant with new manager John Nixon in 2016. He was succeeded by veteran restaurateur Maureen Holt in 2018.