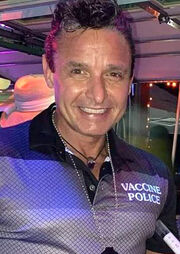 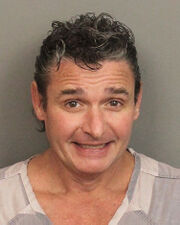 Christopher Paul Key (born September 15, 1973) is a political activist and former fitness professional who was a partner in a fraudulent sports supplement business.

Key graduated from Fultondale High School and studied kinesiology and exercise physiology at the University of Alabama. He was impressed as a young man by the career of Lynn Kenny who claimed to be able to cure cancer and AIDS with ray beams.

Key was a partner in Timothy Hogan's Steel City Fitness and involved in marketing "8ight Labs" holographic bracelets for Warren Hanchey of Atlanta, Georgia before he partnered with Mitch Ross in S.W.A.T.S. Fitness and Performance (an acronym for 'Sports with Alternatives to Steroids"). Ross founded the business in 2011 with offices adjoining his gym in Fultondale. The company marketed unproven products for performance enhancement and rapid healing to college and professional athletes. Its flagship was a "deer antler spray" which Key claimed contained a natural form of insulin-like growth factor 1 (IGF-1), the synthetic form of which was banned by the NCAA.

A January 2013 feature story in Sports Illustrated detailed S.W.A.T.S' history of misleading claims and its extensive relationships with athletes desperate for performance enhancers that wouldn't get them in trouble with their leagues. Notably, the story detailed a gathering with several members of 2011 Alabama Crimson Tide football team at the New Orleans Marriott just before the 2012 BCS National Championship game.

In September 2013 Alabama Attorney General Luther Strange filed a civil complaint against S.W.A.T.S., alleging at least 264 violations of the Deceptive Trade Practices Act. After a preliminary hearing on September 5, Judge Caryll Privett issued a restraining order against the business, which was raided by the Jefferson County Attorney General and Jefferson County Sheriff's Office and its assets turned over to a court-appointed receiver.

Since losing his business, Key has worked as a mover while continuing to promote unproven medical treatments and devices under the names "Health Management Systems" and "Keys 2 Life". He has also shared numerous anti-government claims and references to alleged conspiracies, including false claims about vaccines, on social media. In 2019 he began appearing with a badge around his neck and an embroidered polo shirt reading "Vaccine Police". During the COVID-19 pandemic he has appeared at public meetings to protest against mask orders and vaccine mandates. While unemployed he has raised tens of thousands of dollars through crowdfunding platforms, part of which he has used to pay for billboards with false claims about vaccines and other political messages alongside links his website.

Key was removed from a meeting of the Jefferson County Board of Education, afterward claiming his appearance as a "victory". He later berated Whole Foods employees regarding mask requirements at the store's Cahaba Village Plaza location, resulting in a trespassing charge. When he appeared at Mountain Brook Municipal Court to enter a plea, he instead mocked the judge and was forcibly removed.

Key was invited to appear at an organized anti-vaccination rally on August 14 outside of Mercy Hospital in Springfield, Missouri. He used the platform to make false accusations against vaccine developers and public health officials. He addressed a board meeting of Springfield Public Schools and picketed pharmacies. On August 16 he and a group entered a Wal-Mart store in Springfield and shouted threats at pharmacy staff who had been administering vaccinations, including a false statement that they could be put to death under the "Nuremburg Code". He also made false statements to responding police officers while livestreaming the confrontation on Facebook. After leaving, he proceeded to other pharmacies in the area to berate workers. The next morning he confronted CoxHealth CEO Steven D. Edwards in a parking lot, accusing him of "crimes against humanity".

On December 22, Key told Tulsa, Oklahoma-based business coach Clay Clark that he would confront Louisiana Governor John Bel Edwards and place him under citizens' arrest on February 7 if he continued to promote COVID vaccinations.

Key was scheduled to appear in Jefferson County Circuit Court on January 4, 2022 to enter a plea on charges of 3rd degree criminal trespass from the April confrontation at Whole Foods. He was not allowed to enter the courtroom or address the judge because he refused to wear a face covering. Instead he was ordered held for contempt and booked into the Jefferson County Jail. After his release, Key made a video recommending that people drink their own urine to prevent COVID, and claimed to be doing so himself.