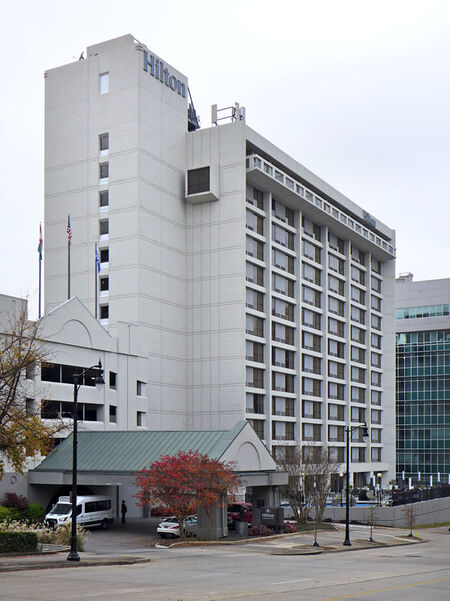 Hilton Birmingham at UAB in April 2018 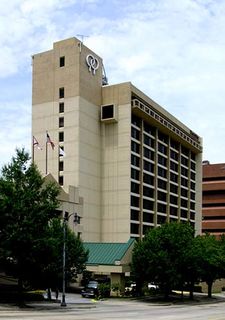 The Hilton Birmingham at UAB (originally the Kahler Plaza Hotel, later the Plaza Hotel South, Birmingham Hilton,Radisson Hotel of Birmingham, and Doubletree Hotel Birmingham) is a 295-room, 14-floor hotel located at 808 20th Street South on the southwest corner of University Boulevard in the heart of the Birmingham Medical District.

The exposed concrete building was built in 1973 on the former site of the Cullom Apartments, which served as the UAB Medical Center Annex until their demolition in 1969. It was developed by Birmingham's Daniel Realty Company and UAB. The property originally housed 298 rooms as well as a conference center. A five-level parking deck was built alongside the hotel, which was to have been paired with a 200-unit apartment building when first proposed.

The hotel was first operated by the Kahler Corporation of Rochester, Minnesota as the "Kahler Plaza Hotel". A raised terrace houses the hotel's swimming pool and saunas. The original cocktail lounge, called The Depot, was decorated in the style of an early 1900s train depot. The main dining room, dubbed The Tiffany, was decorated in an art nouveau style. Jake Reiss III opened his J. Reiss Custom Clothier in the hotel in the mid 1970s.

By 1975 the hotel was being operated by Best Western. In the 1980s it was briefly owned by the Hilton Hotel chain. An Irish pub, Gator O'Brien's, operated there in 1986 with Foxy Fats & Company as its house band. In the late 1980s the property was sold to Columbia Sussex of Fort Mitchell, Kentucky, which rebranded the hotel as a Radisson Inn. Hilton did not return to the area until it bought the former Sheraton Perimeter Park South in 2002. Radisson operated the hotel restaurant as J. Gatsby's.

In November 2005 Columbia Sussex began a $10 million makeover of the Southside hotel reopening it in June 2006 as the city's first Doubletree (a Hilton brand). The restaurant was renamed Bistro Americana.

In November 2016 the non-profit UAB Educational Foundation acquired the DoubleTree by Hilton and adjacent parking deck for $6.7 million and contracted with the Pyramid Hotel Group of Boston, Massachusetts to manage it. In 2018 the hotel underwent a $20 million renovation as it converted to the Hilton brand. The updating of guest rooms and lobby spaces was designed to reflect the hotel's relationship with UAB. Lisa Castagna is general manager. The restaurant was rebranded as Lab Bar and Kitchen', headed by chef Matthew Comarato. The hotel also has a "Lab Market Café" selling prepared foods, and a Blaze Coffee Bar.

During the 2016 renovation, the hotel’s meeting rooms were transformed into upscale, renovated spaces for conferences, galas, weddings and more. Three of those spaces were named especially for prominent figures in UAB’s history (the Hamilton Ballroom was named for two distinguished clinicians) – Virginia Dare Hamilton, M.D., Herschell Hamilton Sr, M.D., Delois Skipwith Guy, DSN, and Jimmie Montgomery, M.D. Virginia Hamilton was the first woman to receive a doctor of medicine degree from UAB School of Medicine. Herschell Hamilton was known for his work as attending physician to many activists injured during the civil rights movement. He received a clinical appointment in the School of Medicine's Department of Surgery in 1968, becoming was the first black board-certified general surgeon in University Hospital. Delois Skipwith Guy was hired in 1969 as UAB's first black tenure-track faculty member.