From Bhamwiki
(Redirected from UAB School of Medicine)
Jump to: navigation, search 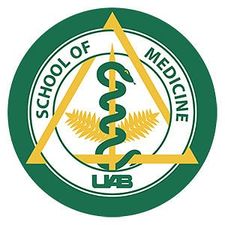 The UAB Marnix E. Heersink School of Medicine is a graduate medical school at University of Alabama at Birmingham, with programs in Huntsville, Montgomery, Selma and Tuscaloosa.

The school was founded in Mobile in 1859 as the Medical College of Alabama, and moved onto the Tuscaloosa campus of the University of Alabama in 1920 under the direction of Abraham Flexner.

A University of Alabama Extension Center opened in Birmingham in 1936. The medical program was formalized as a four-year medical college by order of Governor Chauncey Sparks in 1943. Roy Kracke was appointed as the first dean of the school a year later, and oversaw the relocation of the program to Birmingham's Medical Center in 1945.

UAB president Carol Garrison and School of Medicine dean Robert Rich changed the name to the "UAB School of Medicine" and applied UAB's green and gold colors to its seal in 2008. After receiving a $95 million gift from eye surgeon and real estate investor Marnix Heersink in 2021, the school adopted its present official name.

As part of UAB, the School of Medicine has been recognized as a leading research and treatment center. Currently, the UAB School of Medicine has 790 graduate students and 1,087 post-graduate residents and 211 research fellows, along with 1,649 faculty members across 27 academic departments and 40 multidisciplinary centers and institutes. It operates in conjunction with the UAB Medical Center ("University Hospital") and with its affiliates, including Children's Hospital, the Birmingham VA Medical Center, and Ascension St Vincent's.