This article is about the current student center, for the former facility, see Hill University Center. 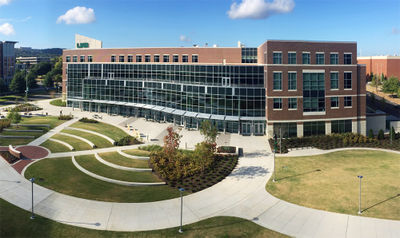 The Hill Student Center is the home of student services and activities on the UAB campus. It was completed in December 2015 on the site of the former Hill University Center, on the block between 7th Avenue South and University Boulevard and between 14th and 15th Street South.

Construction of the new 159,000-square-foot, four-story facility began in 2013 with an estimated completion in time for the Fall 2015 semester. It was designed by Hastings & Chivetta Architects of St Louis, Missouri with Herrington Architects of Birmingham. Doster Construction built the center for $35 million. The building was officially dedicated on January 20, 2016.

Like its predecessor, the building was named for former UAB President S. Richardson Hill. It includes a multi-media campus visitors' center, a 600-seat multi-purpose room which can be divided as required, a 200-seat theater, a food court, offices and informal gathering spaces and outdoor balconies. Retail tenants include a campus bookstore, Starbucks Coffee, Panera Bread, Full Moon BBQ restaurant, and a technology center focusing on sale and service of Apple products.