The Lister Hill Library of the Health Sciences, located at 1700 University Boulevard, is the health sciences/biomedical library for the University of Alabama at Birmingham. It was established in 1945 and is the largest biomedical library in Alabama as well as being one of the largest in the Southeastern United States. The library is named for former Senator Lister Hill. The Reynolds Historical Library and the Alabama Museum of the Health Sciences are housed on the 3rd floor of the library. 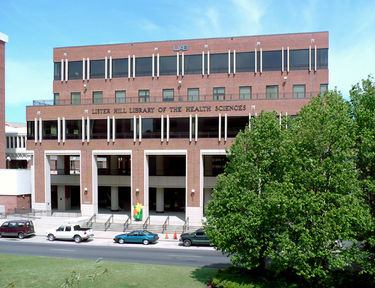 The medical library moved to Birmingham with the University of Alabama's medical school in 1945. By October of that year a space on the 6th floor of Hillman Hospital was set aside for the collection. The library absorbed other collections and expanded into space in the South wing of the new Hillman Building in 1952.

Construction of a new library building began on July 30, 1968 and concluded with the dedication of the newly-renamed library, now part of the autonomous University of Alabama at Birmingham, on October 19, 1971.

On September 14, 1994 ground was broken for a major expansion and renovation of the Lister Hill Library. Proceeding in phases that minimized disruption to library services the newly-expanded and remodeled building was rededicated on May 2, 1997. A statue of Hippocrates, formerly located outside the building, was moved into the building's lobby as part of the renovations.

In October 2012 the fourth floor of the library was dedicated as the university's Edge of Chaos, an interdisciplinary space created by the UAB School of Public Health. The space provides office space for various departments in Public Health as well as other office and meeting space that is available to various campus and community groups with the goal to foster collaboration. The vision for the space was based on the work of author Steven Johnston, who wrote that collaborative solutions to wicked problems occur in an environment that runs a fine line between order and chaos, or as stated by the school, innovation happens at the edge of chaos.

In 2013, David Hooks was hired as the Director of Innovation for the Edge of Chaos space. He left in 2019 to pursue other interests.

In August of 2015, John Meador became the first dean of the UAB Libraries. He retired in January 2020.

In January of 2019 a new virtual reality lab and a 3-D printing lab were added to the library.

The building is connected on the second floor to a pedestrian plaza and crosswalk that provides access to Volker Hall, the UAB School of Nursing building, the UAB Webb Building, the Henry Peters Building, and the Learning Resource Center.