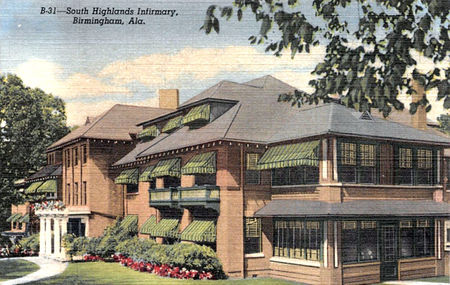 The South Highland Infirmary was founded in 1910 by a group of physicians headed by Edmond Prince. It was originally located in a large brick building at 1127 12th Street South. The hospital offered surgical procedures and long-term care with separate sections for white and non-white patients, and for children with disabilities.

The South Highlands School of Nursing graduated over 1,500 students before closing in 1952. In 1971, after several expansions, the infirmary was renamed South Highlands Hospital.

The hospital was purchased by HealthSouth in 1989 as its flagship medical center. HealthSouth added a four-story professional office building and a 5-level parking deck to the campus. The hospital housed the neurosurgery practice of Dr Swaid Swaid until he moved to Brookwood Medical Center in 2003, as well as the nationally-famed Andrews Sports Medicine & Orthopaedic Center until it moved to St Vincent's Hospital in 2005. In 1994 UAB partnered with HealthSouth on the purchase of a $3 million gamma knife which was installed at the center. Opthalmologic surgeons at HealthSouth Medical Center pioneered the Fluidic Internal Limiting Membrane Separation procedure for removing scar tissue inside eyeballs.

The Digital Hospital on U. S. Highway 280 was planned as its replacement. HealthSouth entered into a partnership to manage the hospital with UAB Health Centers in 2005, and began negotiations to sell the property to UAB. HealthSouth had planned to transfer its bed licenses to their new high-rise facility, but UAB's attempts to purchase bed licenses from HealthSouth Metro West in Fairfield were opposed by Noland Health Services. HealthSouth eventually made the Highlands licenses part of the package and UAB closed the sale in 2006 for $33 million.

In March 2018 the hospital was the scene of a fatal workplace shooting. A nurse supervisor was killed and a surgical instrument supervisor critically wounded when a sterile supply worker, who was being reprimanded, pulled out a handgun and shot them both before committing suicide.