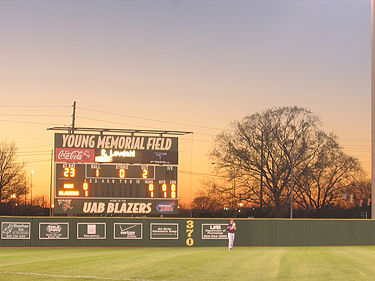 UAB's baseball stadium opened with a game against the Vanderbilt Commodores on February 26, 1984. It was given its present name in honor of former UAB administrator Jerry Young on April 18, 1985. Hall-of-Famer Brooks Robinson threw the first pitch at that game. The first night game was played at the stadium on March 23, 1993. The press box was named in honor of Harry "The Hat" Walker on March 4, 1997.

The baseball field is oriented with home plate in the southwest. The outfield fence is 330 feet deep in left and right field and 400 feet deep to center. The fence is 8 feet tall. Any ball hit above the 8-foot line and striking the scoreboard, "batter's eye" wall, or foul pole above that height is considered a ground rule home run.

Young Memorial Field was the site of the 1992 Great Midwest Conference Baseball Championship.