This article is about the former syrup plant. For the bottling building on the same block, see Dr Pepper Bottling Plant. 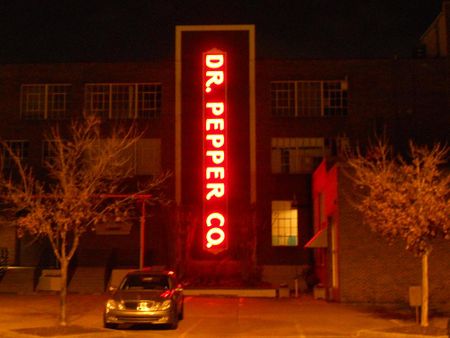 Sign on the west side of the Dr Pepper Syrup Plant, March 2011

The Dr Pepper Syrup Plant is a 3-story industrial building located at 2829 2nd Avenue South, on Block 416 in the North Lakeview Industrial District. It was constructed in 1931 to designs by architect David O. Whilldin. The building was leased to the Dr Pepper Company as its first syrup plant outside its home of Waco, Texas. Syrup for all beverage distribution east of the Mississippi River was produced in the facility.

The 75-foot by 150-foot concrete-frame structure features large areas of metal windows allowing natural light to flood the interiors. The rest of the frame is infilled with hollow clay tile blocks and faced with red bricks. Below the second floor window sills, the facade is divided by precast concrete panels which appears as slightly-protruding bays, decorated with the Dr Pepper Company's trademark clock logo. A wider bay on the 2nd Avenue facade also is inscribed with the company's name. The west facade features a tall neon sign which extends above the roof parapet. A loading dock on the south (alley) side gave access to a rail spur and a larger dock on the west side was used by delivery trucks. A small boiler room was constructed adjacent to the building's southwest corner.

The syrup plant remained in operation until 1982. It was sold to Sloss Real Estate in 1988 and became the centerpiece of their "Pepper Place" development, which first opened in 1990. Restoration of the building's exterior was completed in 1999.