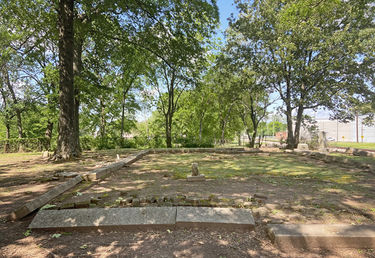 View of Elyton Cemetery in 2020

Elyton Cemetery, often called Old Elyton Cemetery is a small cemetery located on a one-acre plot at 426 2nd Avenue North near Arlington Home and Gardens. It is known as the oldest cemetery in the present limits of Birmingham. The land that the cemetery is on was purchased by Colonel John Dupuy in 1821 as part of a 40 acre tract of land. Colonel Dupuy bought the land from William Ely, for whom the city of Elyton was named. The cemetery was deeded to the city of Elyton before Dupuy's death in 1856.

There are 142 burials recorded at this cemetery, the oldest belonging to an "Infant Son" who was born and died in 1805. Elyton Cemetery is also the burial place of Joab Bagley, the first probate judge elected by Jefferson County voters. Most of the cemetery's burials predate the founding of Birmingham in 1871. The latest burials were those of Agnes Nicholson in 1919 and Velma Mae Melton in 1987. Even as early as 1872 there were reports that the cemetery was in a, "very dilapidated condition."

In 1891 a fund of $450 was raised to restore the aging plot, but by 1904 the Jones Valley Times was again bemoaning that, "cattle browse in its silence, the hog roots among the tombs, and everything has a neglected aspect as though among the living there was no one who loved them, no one who remembered the precious dust. No fence; the earth full of caves where graves have sunk down, giving the whole place the appearance of having been forgotten long ago."

In 1914 an Elyton Cemetery Memorial Association was formed to clean and restore the cemetery. The committee, which included M. T. Porter, Sam Greene and Judge W. M. Walker, planned, "to erect a concrete wall, wire fence or privet hedge around the cemetery."

In 1951 the state of the cemetery was again a cause for concern, with weeds and vines covering the ground, markers toppled and broken, fences left in remnants, and a small baseball diamond in use by neighborhood children, with marble markers used for bases. In 1958 juvenile court judge Talbot Ellis, grandson of pastor C. C. Ellis, brought together a group of civic leaders and descendants of people buried at Elyton Cemetery to formulate a long-range maintenance plan. The group hired college student Hubert Whittle to begin clearing overgrowth, but progress was undermined when a group of vandals toppled and damaged many of the tombstones. Though the West End Lions Club, West End Civitan Club, Elyton Civic Club and Elyton Garden Club all participated in planning, together they raised only $200, far short of the $1,800 needed just to enclose the site with a fence.

A historic plaque was dedicated at Elyton Cemetery by Mayor George Seibels on December 14, 1969. The headstone of pioneer Williamson Hawkins, who died in 1875 and was buried on a family plot, was relocated to Elyton Cemetery in 1970.

In the brick courtyard of the cemetery was a marble statue known as the "Laughing Girl", though it has not been seen intact since the mid- to late 1970's. According to the Birmingham History Center, there is a chance that the statue was sculpted by Giuseppe Moretti.