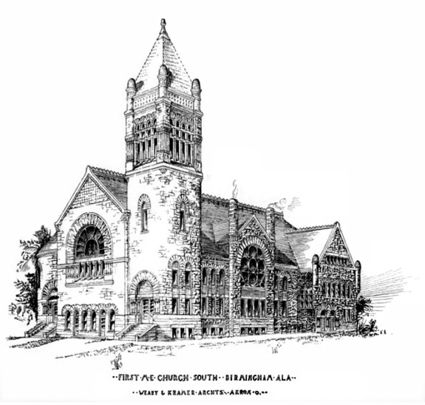 First United Methodist Church of Birmingham (originally the First Methodist Episcopal Church South) is located at 518 19th Street North, on the southwest corner of its intersection with 6th Avenue North in downtown Birmingham. The senior pastor is Keith D. Thompson.

The church first met in January 1872 in the Bryant House, a storehouse at First Avenue and 21st Street North. Before the end of June the congregation constructed a small frame structure for $1,600 on a lot provided for a token $5 by the Elyton Land Company on 6th Avenue and 21st Street. C. C. Ellis was assigned as the church's first full-time pastor.

Before 1883 the original building was replaced with a larger, brick-clad sanctuary at 4th Avenue North and 19th Street. The $20,000 building featured tall lancet windows and a bell tower with a steeple roof over the eastern entrance.

In the autumn of 1891, First United Methodist gathered as Bishop John Keener dedicated the present 2,400-seat sanctuary. The building, now on the National Register of Historic Places, was designed by George Kramer of Weary & Kramer, an Akron, Ohio firm known for its church designs. It is in the American Romanesque Revival style of architecture, also known as "Richardsonian Romanesque", and is clad in Ohio brownstone. The Gilreath-Decker Construction Co. was the builder, and the cost, originally to have been around $80,000, ended up exceeding $160,000. A marble baptismal font by Tiffany & Company of New York was purchased for the building.

The current entry lobby was originally an Akron plan Sunday School with an assembly room and two levels of classrooms. In 1909 First Methodist pioneered the use of individual cups to serve communion wine as a means of discouraging the spread of disease.

First United Methodist Church was added to the National Register of Historic Places in 1982.

The interior of the church was refurbished in 2014 by Hoar Construction.