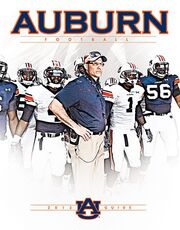 Malzahn graduated from Fort Smith Christian High School in Fort Smith, Arkansas in 1984 and was a walk-on receiver for the Arkansas Razorbacks under then-head coach Ken Hatfield. After one season he transferred to Henderson State University in Arkadelphia, Arkansas, where he was a two-year letterman and earned his bachelor’s degree in physical education in 1990.

Malzahn got his first coaching job as a defensive coordinator at Hughes High School in 1991. He became head coach in 1992 and, two years later, reached the state championship game with an upset of Pine Bluff Dollarway. Hughes fell just short in the title game, losing to Lonoke on an interception in the final minute.

His success at Hughes and his wide-open attack landed Malzahn a head coaching position at Shiloh Christian in 1996. Over the next four years, Malzahn transformed Saints into one of the most dynamic offenses in the nation. In 1998, Shiloh Christian quarterback Josh Floyd racked up 5,878 total yards and 66 passing touchdowns. Malzahn guided the Saints to back-to-back state championships in 1998 and 1999.

In 2001, Malzahn took over for legendary coach Jarrell Williams at Springdale High School. He led the program to two state championship game appearances in his last four years, winning the 5A title with a 54-20 victory over West Memphis in 2005.

Included on the championship team were prize recruits who all eventually joined their coach at the University of Arkansas.

The 2006 Razorbacks won the Southeastern Conference's western division championship, but finished the season with back-to-back losses to LSU and Florida, then lost to Wisconsin in the Capital One Bowl to finish with a 10-4 record. Malzahn was named National Offensive Coordinator of the Year by Rivals.com. However his relationship with Nutt was strained and when new Tulsa Golden Hurricanes head coach Todd Graham offered him a job at the University of Tulsa, Malzahn accepted. Mustain and Williams followed him to Tulsa.

During the 2007 season, Malzahn's offense ranked first in the nation in total yards and third in passing. At the end of the season, he interviewed for the vacancy at Arkansas left by Houston Nutt's resignation, but was passed over in favor of Bobby Petrino.

Malzahn accepted the head coaching position at Arkansas State after the 2011 season. He led the Red Wolves to a Sun Belt Conference championship during his one-year tenure.

In 2013, the Auburn Tiger offense under Malzahn was led by quarterback Nick Marshall. On November 16, 2013 with the Tigers down by 1 against Georgia facing 4th-and-18 and 36 seconds left in the game, Malzahn called the play "Little Rock" for Marshall which would become known as "The Prayer at Jordan–Hare". Marshall hit Ricardo Louis on a tipped 73-yard Hail Mary pass to give Auburn the victory.

Two weeks later, in the Iron Bowl against Alabama, Malzahn's Tigers avenged two consecutive blowout losses to the Tide with a dramatic 34-28 win, clinched on an epic 109-yard return of a missed field goal (100 yards under NCAA scoring rules) for the game-winning touchdown as time expired. The win completed the greatest single-season turnaround in SEC history, and gave Auburn the SEC West title. Auburn would go on to win the 2013 SEC Championship game later that year against the Missouri Tigers. On December 8, 2013, it was announced that Auburn would play the Florida State Seminoles in the 2014 BCS Championship Game.

After leading the heavily favored Seminoles 21–3 in the second quarter, Auburn failed to stay in front and the lead slowly slipped away. Heisman Trophy winner Jameis Winston stepped up in the 4th quarter and rallied the Seminoles to a victory, leading the way with 6/7 passing for 77 yards on route to the go-ahead scoring touchdown. Auburn lost by a score of 34-31.

In 2017, Malzahn led the Tigers to the SEC Championship game by defeating #1 ranked Georgia and #1 ranked Alabama over the span of three weeks. In a rematch with the Georgia Bulldogs, Auburn lost the 2017 SEC Championship Game 28–7. They went on to play Central Florida in the Peach Bowl where they would lose 34–27, a game that sparked controversy as it led to the first split National Championship since 2003 with the Colley Matrix (a poll deemed legitimate in determining a champion) awarding the title to UCF while Alabama won the actual CFP National Championship game by beating Georgia 26–23 in overtime. Immediately after the season, Malzahn agreed to a seven-year $49 million contract extension with Auburn.

Mainly on the strength of his first season, Malzahn is fifth on Auburn's all-time wins list, behind only Shug Jordan, Mike Donahue, Pat Dye and Tommy Tuberville.

On December 13, 2020, Malzahn was fired as head coach of Auburn at the conclusion of his eighth season. He finished with a 68-35 record, including 39-27 in the SEC. Auburn will buy out the remainder of his contract, to the tune of $21.45 million.

Malzahn is married to Kristi Otwell Malzahn and together they have two daughters, Kylie and Kenzie.