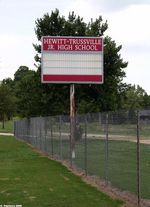 Hewitt-Trussville Junior High was a 500-student junior high in the Jefferson County School System that fed into Hewitt-Trussville High School. Originally constructed in 1964, HTJH occupied four buildings adjacent to the Cahaba Homestead Village at 601 Parkway Drive in Trussville. A classroom annex was later constructed in 1987 adjacent to the original structure. The school carried both eighth and ninth grades.

Currently the remaining structure is used as classrooms for the Trussville Police Department. Additionally, the baseball stadium on the eastern end of the grounds is also still in use.

In November 2006, it was announced that the Trussville School System would utilize the remaining portions of the campus to serve as the location of its student services department. The additional space allows for expanded alternative, special education and gifted programs.

Due to its closure in 2002, this never served as a junior high as part of the Trussville School System, founded in 2005.