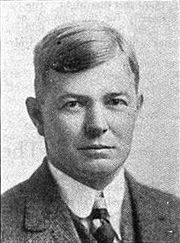 Ferguson was the son of General Fred Ferguson and the former Laura Burr of Montgomery and later of Birmingham. He attended public schools and the Dubose Academy in Zellwood, Florida. He graduated from the University of Alabama in 1896, having served as editor of the Corolla and manager of the Alabama Crimson Tide baseball team as a senior. He returned to complete his LL.B. the following year.

Instead of going into law, Ferguson took a job with the Birmingham Age-Herald as a reporter, leaving in 1899 to join the insurance firm of Louis V. Clark & Company. That year he partnered with James Dedman and Harry Miles to stage a "Society Circus" for the Birmingham Athletic Club. In 1900 and 1901 he helped organized an the Elite Opera Company's performance series at the Lakeview Park Pavilion with E. E. Williams. From 1904 to 1907 he served as president of the University of Alabama Alumni Society and worked with Governor B. B. Comer to raise $500,000 for the construction of three new buildings on campus, dubbed the "Greater University" campaign. He also organized the university's first glee club.

It was Ferguson's suggestion, in 1911, to begin planning for a "Civic Center" to house government buildings. He proposed Block 34 (between 19th and 20th Street and between 6th Avenue North and Park Place) for the purpose, but later, in consultation with Warren H. Manning, modified the proposal to center on Capitol Park, as published in Manning's 1919 City Plan of Birmingham. Ferguson helped realize that plan by participating in site selection for the Municipal Auditorium (1924) and the Jefferson County Courthouse (1932).

In 1914 he became a vice-president of the Jemison Real Estate and Insurance Company, owned by his brother-in-law Robert Jemison Jr. With Jemison he helped develop Mountain Terrace, Cliff Road, Altamont Road and other residential subdivisions. He helped reorganize the Birmingham Real Estate Board and became its president and served as secretary for the National Association of Real Estate Boards in 1916, helping launch the national "Own Your Home" campaign. In the 1920s he helped area planners complete several projects, including the 27th Avenue North connection between Inglenook and North Birmingham, the extension of Shades Creek Parkway from Montgomery Highway to Cahaba Road, the widening of Montevallo Road and the purchase of property for the new Birmingham Country Club in Mountain Brook, and the widening of 20th Street South from 50 to 80 feet.

In 1934 he left Birmingham to spend four years as Deputy Chief Appraiser for the Home Owner's Loan Corporation in Washington D.C. In 1942 he helped organize the Birmingham Historical Society and served as its president. A lifelong archivist, he compiled more than 150 scrapbooks tracing the history of Birmingham from its founding through the mid-1960s. These make up the valuable Hill Ferguson Collection housed at the Birmingham Public Library's Department of Archives and Manuscripts. He also oversaw the gathering of materials for the 1950 Birmingham City Hall time capsule, set to be opened in 2050.

In 1939 Ferguson was appointed to the first Jefferson County Board of Equalization and oversaw a landmark inventory of over 300,000 real estate parcels in the county with legal descriptions and photographs of improvements. In the 1940s Ferguson served on the committee that assembled 12 blocks of land for the planned Medical Center complex in Southside and led efforts to purchase the William Mudd residence (Arlington) for the city as a historical attraction.