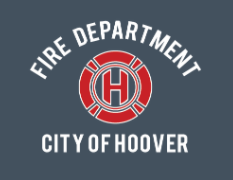 The Hoover Fire Department is responsible for responding to fires, medical, and hazardous material spills in Hoover. The department consists of approximately 150 emergency responders assigned to eleven fire stations throughout the city. In addition to the main department, there is also the Hazardous Material Response Unit and the Fire Prevention Bureau, which consists of 5 personnel who oversee inspections and related matters. The fire chief is Clay Bentley and department headquarters are located at 2020 Valleydale Road at the Hoover Public Safety Center.

In 1976 the city took over the full time operation of the department and its employees and hired the first full-time Fire Chief Tom Bradley, who served until his retirement in 2009. He was replaced by battalion chief Chuck Wingate, who began his firefighting career at age 17 for the Bluff Park Volunteer Fire Department, which transfered to Hoover Fire upon the area's annexation in 1985. During Wingate's tenure as chief, the department achieved a Class 1 insurance rating in May 2017, and Wingate retired that August.

As of 2021, Hoover Fire Department has eleven fire stations. The department attempts to keep all homes in Hoover within five miles of a fire station.