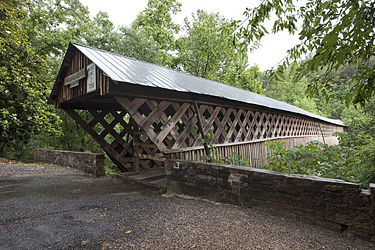 The Horton Mill Bridge in 2010

The Horton Mill Bridge is a 220 foot-long double-span covered bridge, built in 1935 over the Calvert Prong of the Locust Fork River just north of Oneonta in Blount County. The bridge deck is 70 feet above the bottom of the gorge, making it the highest covered bridge above a river in the United States.

The bridge replaced an earlier bridge accessing Thurman Horton's water mill complex on the west side of the gorge. The older 1894 bridge was about 3/4 mile downstream, at the foot of Sand Mountain.

The 14 foot-wide by 10 foot 6 inch-high bridge is of the "Town truss" type patented in 1820 by Ithiel Town of Connecticut. The lattice-work of small wood braces forming the walls of the bridge is pegged together to act as a single large truss. The bridge was built in 1934-35 by "fifteen men working from sunup to sundown for a year and a half". The crew was supervised by Talmedge Horton, a descendent of T. M's, along with Forrest Tidwell and his nephew Zelmer, who also built the Swann Bridge, Easley Bridge and Nectar Bridge, all long spans which helped earn Blount County the reputation of Alabama's covered bridge capital.

The abutments rest on the rock ledges of the gorge while an intermediate pier support is built of masonry and concrete. The timbers are hand-hewn oak, felled in the valley and raised to the bridge by rope. A second timber support has been added to brace the longer span. The original wooden shingles have been replaced with a metal roof.

The bridge, which was the first covered bridge in the South to be added to the National Register of Historic Places is now owned by the Alabama Historical Commission (AHC). It was featured in a 1969 tour of covered bridges corresponding with Blount County's sesquicentennial. The bridge was restored in 1974 by the AHC in cooperation with the Blount County Commission.

The Horton Mill Bridge is featured on the seal of the Blount-Oneonta Chamber of Commerce. It was photographed by Jet Lowe for the Historic American Engineering Record in 2002.

In September 2007 vandals attempted to remove some of the roof supports from the west end of the bridge. The structure was significantly damaged and was deemed unsafe. The bridge was closed to all traffic on September 27. Blount County began working shortly afterward to secure funding for structural analysis and conservation of its three covered bridges.

The Horton Mill Bridge was inspected and briefly re-opened to traffic in 2009, but later that year a consultant's report indicated that 3-ton vehicles could not safely traverse the span. Structural restoration plans have been drawn up and submitted to the Alabama Department of Transportation for review. If approved, Bob Smith Construction began the restoration work in early 2012.