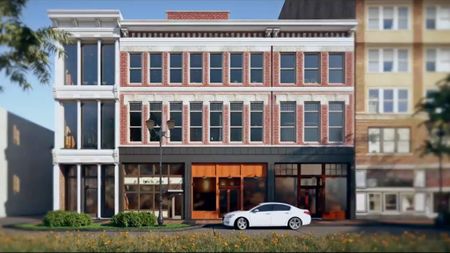 Rendering of the Iron Age Project

The Iron Age Project is a 26,000 square-foot retail and office redevelopment of four adjoining buildings at 212-218 20th Street North in downtown Birmingham.

Harsha Hatti purchased the 218 20th Street North building in 2003 and renovated the ground floor for a restaurant tenant. Seafood D'Lite opened there in 2008, followed by Bistro 218 in 2012.

Hatti relocated his company, CoreLinQ Innovations to the upper floor of the 214-216 20th Street North building in early 2016. He later purchased the vacant Iron Age Building next door and moved ahead with a concept of a shared hub for healthcare technology startups.

Architect Randy Britton designed the renovations, and Robbie Dellinger was the general contractor. Custom windows were constructed for the project by Jim Miller.

The construction was financed by Southern States Bank with assistance from the Birmingham Department of Innovation and Economic Development. Hatti did not apply for Historic Tax Credits, citing an approach to preservation that conflicts with the tax requirements. The project was completed in late 2019.