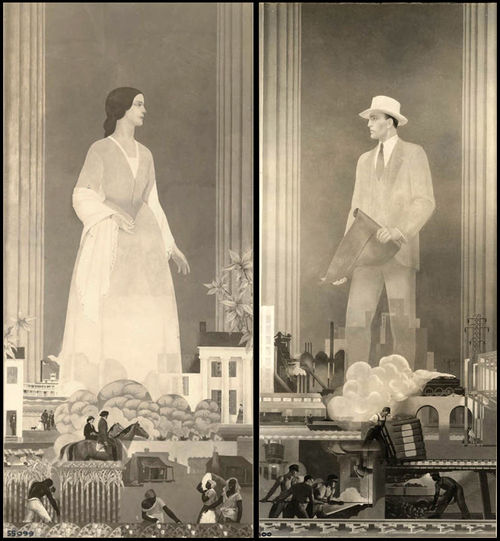 The Jefferson County Courthouse murals, entitled "Old South" and "New South", are a pair of 17'-6" tall by 8'-0" wide Art Deco-style painted murals on either side of the west foyer of the Jefferson County Courthouse, entering from Linn Park. They were painted in 1931 by Chicago-based artist John W. Norton (1876-1934), who was commissioned by the architects, Holabird & Root. The murals, along with the brass elevator doors and a terrazzo map of the county inlaid in the floor, are the most significant interior features of the building. In 2018 they were joined by a third mural "Justice is Blind" by Ronald Scott McDowell. was installed in 2018.

The "Old South" mural, on the South side of the lobby, is dominated by the monumental figure of a woman in a modest antebellum dress framed by fluted columns. Around her feet is a scene of African American slaves harvesting cotton and sugar cane near some humble cabins in the foreground. Behind them are two gentlemen on horseback, a riverboat, a warehouse and a Greek Revival style mansion.

The "New South" mural, on the North wall, features a similar composition, with the dominant figure that of a man in a suit and hat holding open a rolled drawing. There is black miner, a group of white ironworkers, and another white worker loading baled cotton in the foreground. Behind them are seen a locomotive crossing a bridge, a power plant, a blast furnace and a city skyline.

Norton was partly inspired by the work of Mexican artist Diego Rivera to highlight working people in his murals. The composition of the two vertically-oriented murals with a single dominant figure reflected his "Ceres," Greek goddess of agriculture, for the main trading floor of the Chicago Board of Trade. That painting was executed in oils on cotton duck and affixed to the painted plaster wall of the building.

Some aspects of Norton's composition were the subject of debate at the time. Herbert Salmon, secretary for the County Commission, wrote to the artist on February 8, 1932 to suggest changes to the paintings.

Among the criticisms was a complaint that the slaves depicted in the "Old South" mural did not comport with the Commission's expectations. Salmon wrote specifically about the female slaves, "They seem too wild looking for the more or less lazy negro of the cotton patch[...]The figures are much too vigorous and their facial expressions are more like the jungle than the south."

Over the years some have objected to the depiction of African American slave laborers and miners at the feet of the heroically-scaled central white figures in the courthouse murals. The images have been perceived as racist, and as emblems of "Jim Crow" society's expectations. Jefferson County Commission members Shelia Smoot and Jeff Germany have, at different times, proposed covering them up.

In their 2008 survey of Civil Rights Memorials across the South, geographers Owen Dwyer and Derek Alderman noted that "In the wake of the Civil Rights Movement and the arrival of black elected officials, calls to remove these murals of the Old and New Souths have been made. Outright removal, however, would destroy a 'material witness' to white supremacy's pervasiveness, depriving future generations of a part of their collective past." They suggested that a preferable means of addressing the "repugnant element" would be to commission a "counter-mural or plaque" similar to the plaque added to New Orleans' 1891 "Liberty Monument" in 1974, disavowing its overt racism.

In July 2015 a petition was created by Birmingham native and University of Arizona assistant professor Anne Garland Mahler calling for the murals to be removed from the Courthouse, "to a place that encourages critical engagement," like the Birmingham Museum of Art or Birmingham Civil Rights Institute. Hezekiah Jackson of the Birmingham Metro NAACP and William A. Barnes of the Birmingham Urban League supported the petition, which had 183 signatures as of November 19.

Jefferson County Commissioners Sandra Brown and Joe Knight expressed support for the idea of removing the murals. Commissioner Jimmie Stephens has estimated that the cost to remove the murals could exceed $100,000, which would be difficult for the debt-ridden county to find. Commission President David Carrington suggested that it was also a good time to consider removing the carved designs resembling swastikas from the courthouse entrances and the framed photographs of former commissioners convicted of crimes during the Jefferson County sewer construction scandal.

At their first meeting on November 18, the committee resolved that some change was necessary and solicited specific recommendations from individual members within 120 days. At a follow-up meeting on April 26, 2016, the committee voted 9-3 to keep the murals in place and develop a plan to install a retractable covering which would conceal them at all times, except during scheduled educational tours.

On August 29, 2017 the committee approved a measure to preserve the existing artwork and to commission Tuskegee-based artist Ronald Scott McDowell to complete a new "Justice is Blind" mural representing progress made since the 1930s. This mural was unveiled on April 24, 2018. It depicts the courthouse, black and white judges, and two blindfolded female figures representing justice. One is black and one is white. Both are grasping a torch.