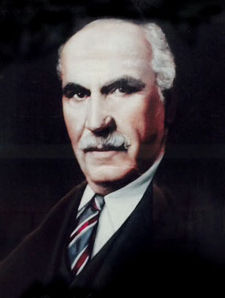 Louis Pizitz (born April 3, 1868 in Brest-Litovsk, Russia (now Belarus); died 1959 in Birmingham) was the founder of the Pizitz department store chain and a noted philanthropist.

Pizitz was the son of Samuel and Bertha Jacobs Pizitz, Polish-speaking residents of Brest, a city near the Polish border which had been ceded to the Russian Empire in the late 1700s. He attended the Hebrew College in Poland, studying to become a rabbi, and worked in the manufacture of woolen goods before emigrating to the United States in September 1889 in search of greater opportunity. After he arrived in New York he was quickly naturalized as a United States citizen. He saved part of his wages to purchase goods which he could peddle from his pack, and soon moved South, working the areas around Augusta, Macon and Valdosta, Georgia.

On July 15, 1891 he married Minnie Smolian, another immigrant from Poland. As soon as he amassed enough capital, he built his own small store in Swainsboro, Georgia in 1892. He moved to Birmingham sometime between 1896 and 1898 and established a store on 1st Avenue North with $10,000 to $15,000 of merchandise in stock. In 1899 the Louis Pizitz Dry Goods Company operated from a leased shop at 22nd Street and 4th Avenue North. After three months, Pizitz purchased a building at 2nd Avenue North and 19th Street. He expanded by building the first part of what grew into the later Pizitz Building in 1921.

By 1920 Pizitz was admired as an honest and successful merchant. He was notably generous with his employees, offering three weeks' bonus pay after a year of service. Pizitz' enormous 74-department flagship store opened in 1925 as the largest department store in Alabama.

The chain eventually encompassed 13 stores across Northern Alabama before it was sold to McRae's in 1986. Pizitz stepped down from actively managing the stores when he was able to pass the business to his son Isadore. He also had two daughters, Sylvia and Bertha.

Pizitz was one of the founders of Temple Beth-El, an orthodox temple which split from the more severely-orthodox Knesseth Israel Synagogue in 1908. He twice served as president of the Young Men's Hebrew Association from 1912–14 and president of his congregation at Temple Beth-El (1925–27 and 1931–33). In the 1930s he built an estate, Happy Dale, off Montgomery Highway in what is now Vestavia Hills.

As a philanthropist, Pizitz' interests were broad and compassionate. He raised funds for numerous diverse groups, including the Knights of Columbus and the YMCA as well as Hillel House. During the 1908 and 1933 coal miners' strikes he sent trucks of food to idled workers and bought mines to give them work. In 1914 when cotton prices bottomed out at 11¢ he bought the crop for 15¢ to store and sell after prices rose, promising to share the profits with the farmers. During World War I he headed the Liberty Bond drive. He was one of the founders of the Holy Name Hospital in Ensley, served on the building committee for Tuggle Institute, and helped establish the first YMCA and public swimming pool for African Americans.

In 1929 Pizitz began an annual tradition of providing Thanksgiving dinners to thousands of hungry families at his stores. Then, accompanied by Brother Bryan, he brought trucks of food to the prisons at Christmas. In years when the school board could only give scrip to the teachers, he treated the paper as cash at his stores. During the Ohio Flood of 1937 many families camped out at Tennessee Coal, Iron and Railroad Company's Fairfield Works. Pizitz sent trucks of food and clothing to them as soon as they arrived. In World War II Pizitz offered $1000 to the first US pilot to drop a bomb on Tokyo. Col. Jimmy Doolittle refused the award, which passed to his unit fund instead.

Pizitz died at his last home in the Sheraton Apartments on Highland Avenue after a long illness. Services were held at Temple Beth-El, led by Rabbi Abraham Mesch and Cantor A. Ostrensky. He was buried at Knesseth Israel and Beth-El Cemetery. Pizitz' stores in Birmingham and Bessemer closed for two days following his death.